Not Really an Update

So, for anyone who didn't notice my comment on my last post: the tests are indicating Petunia has an infection, not cancer. We don't know where the infection is (or was), and we may never know. We're supposed to take her in for an ultrasound to look for an abscess or other GI problem (bowel obstruction? I'm guessing) but they haven't called us to schedule it yet, so I guess that isn't considered urgent. We'll call them back on Monday.

Petunia is much, much better after the antibiotic shot and a few days of oral antibiotics. This may be a coincidence, but I'm taking it as further evidence that the problem was a low level infection somewhere. Whatever the reason, she is playing and giggling and screaming at us if we don't let her down fast enough again. Which is wonderful.

Thank you all for your kind words and good wishes. Some "real" posts will be coming soon. In all this excitement, though, I missed writing a post for Petunia's first birthday, and I'm not sure I'm going to get a chance to do one. I'll try, because there are so many little things about Petunia right now that I want to remember. In the meantime, here is a picture from her birthday trip to the beach- her birthday happened to be the one day last week that she didn't have a fever and was sort of happy. She had a blast playing in the wet sand. 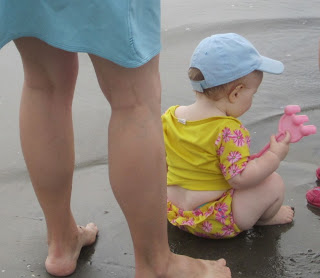 It was a reasonably warm, but gray morning, so we had the beach to ourselves. 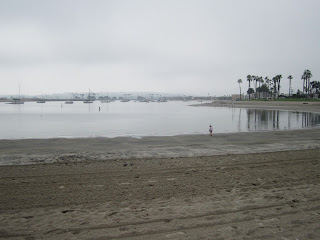 That little spec in the distance is Pumpkin.

So, even though I had a frustrating week at work, and we found out on Thursday that our house needs to be tented for termites.... Times are good.
Posted by Cloud at 9:04 PM