I've written before about how I am a partially reformed picky eater. One of the types of food that I still really don't like is fish.  This puzzles and frustrates my husband, who really likes fish. So, I've been trying to find ways to gradually introduce fish into my diet. Eventually, I may be able to eat relatively unadorned fish. Right now, though, I have to find recipes that mask the fish taste.

And so I present the Fish Hater's Fish Tacos. Not only do these not taste at all fishy, but they also are ridiculously fast and easy to make.

~0.5 lb mild white fish. Halibut works well. I suspect tilapia would, too, but my local supermarket does not carry any tilapia that is rated as sustainable by the Monterey Bay Aquarium. I've also used Dover sole, which does OK, but is a little too flaky. If you like fish, you might like these with salmon. If you don't like fish, don't listen to the fish lovers who tell you that salmon doesn't taste fishy. It does.
1 tbs sesame oil
2/3 cup island teriyaki sauce. I use Soy Vay Island Teriyaki Sauce

. I think you could also make your own.
grated cheese
shredded greens
diced cilantro
chopped pineapple (something I'm going to try adding next time I make this recipe)
tortillas 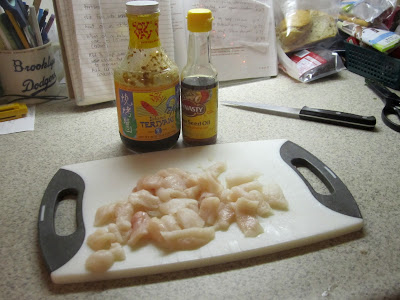 I serve these disassembled- i.e., everyone chooses their own taco toppings from bowls on the table. 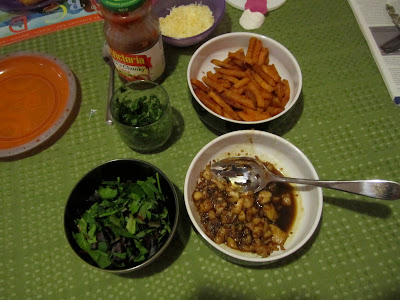 And by everyone, I mean me and my husband. Neither child has agreed to even taste these yet. We have them with sweet potato fries and they are both partial to "tacos" made out of nothing but cheese, so they don't starve.

Source: I made this one up. I was inspired by the Yaki tacos at Islands, though.

Who eats it: Just the grown ups, so far. Petunia will eat my sloppy joe tacos, though, so I'm hopeful that she'll eventually try these. I suspect Pumpkin will be like her mother, and will be trying to add fish into her diet when she's 40. But maybe one of these times she'll surprise me.