One of my favorite things about blogging is that it leads me to cool things that I wouldn't have found on my own. Today's post is about one of those things. Back in November, I was contacted by a book marketer, offering me a review copy of The Discovery of Jeanne Baret: A Story of Science, the High Seas, and the First Woman to Circumnavigate the Globe

, by Glynis Ridley. My first instinct was to politely decline. I can hardly keep up with my once per month book club, and I have a prodigious back log of books that I want to read. 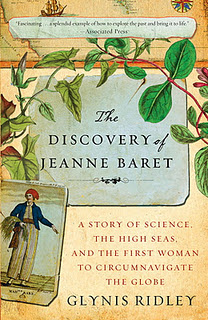 But then I read the blurb about the book, and I was hooked. It is the story of an 18th century working class woman who disguises herself as a man in order to accompany her longtime employer/lover Philibert Commerson on Bougainville's expedition to circumnavigate the globe. Commerson was the expedition's botanist, and Jeanne Baret was his assistant, contributing significantly to his botanical work. The standard story is that no one- not even Commerson- knew she was a woman until the expedition reached Tahiti.

Several aspects of that summary caught my attention: the fact that a woman disguised herself to sail around the world in the 18th century being only the most obvious one. I wondered what her contributions to botany were, and why I'd never heard of her before. I was intrigued by the fact that she was a working class woman, and wondered what role her class played in her story. I could not believe that she could have actually fooled a long time lover with her disguise, and I wondered what had actually happened.

So, I wrote back and accepted the review copy, with the caveats that I was unlikely to be able to post about the book until January, and that I would write my true opinion of the book, whatever they happened to be. I thought that I might be able to convince my book club to read it, and thereby not add to my "to read" back log. Unfortunately for my back log, that has not yet happened, at least in part because we were already reading Cleopatra

, by Stacy Schiff. My book club skews towards fiction over non-fiction, and the other members aren't ready to consider another non-fiction book yet.  (This skew, incidentally, is part of the reason why I have such a back log of books to read- my tastes skew towards non-fiction, so the books I'd pick for myself and the books my book club picks rarely overlap.)

Still, I can't be sorry that my book club led me to read Cleopatra right after I finished reading this book. It was interesting reading the two books back to back. They both dig into sources that are heavily weighted towards the men in the story to reconstruct a picture of a fascinating woman. Of course, Cleopatra is someone we all think we know about, whereas I suspect most people's knowledge of Jeanne Baret is similar to what mine was- non-existent. Furthermore, Cleopatra was an elite, at the pinnacle of her society, while Jeanne Baret was born near the bottom of hers. This difference may explain why I found The Discovery of Jeanne Baret a more enjoyable and easier read than Cleopatra- which is saying quite a lot, because I actually really enjoyed reading Cleopatra. But there was something about Jeanne Baret's story that drew me in and made me unwilling to put the book down.

Part of the draw was the fact that the main character seemed so unlikely. She was born in 1749, into the day laborer class in the Burgundy region of France. Ridley takes a brief detour to describe just what that means. Her parents would have owned essentially nothing. They sold their physical labor on an uncertain market every day. The food the family ate would have been of poor quality and far from completely nutritious. Life expectancy was less than 30 years. Travel was unheard of. According to Ridley, at this time "the average European country dweller never went more than twenty miles from home." I would not be surprised if the average American's daily commute is longer than this.

And yet, by the time she was 26, Jeanne Baret was "living in a fashionable Paris apartment, organizing papers and preparing natural specimens for the eminent but often unsystematic botanist Philibert Commerson." Before long, she would sail around the globe, making her the most traveled woman in Europe, and quite possibly the world. How did this happen? The details are a fascinating read.

Ridley makes a convincing case that Baret's change in fortunes came due to her botanical knowledge, gained as an "herb woman". This leads us to another fascinating facet of the story: the interplay between the science of botany, which was reserved for men, and the folk knowledge of the properties of plants, which was largely the preserve of women. At the time Jeanne Baret lived, botany was in its infancy, and the herb women probably knew more about plants than the most eminent botanists of the day. Commerson seems to have been more willing than some to reach across the gender and class divide and learn what an herb woman could teach him. But he is no modern man. He most definitely does not view Baret as an equal, and some of his actions are likely to infuriate the modern reader. The contradictions in his character make for interesting reading.

Because history was written by the men, the full truth of Jeanne Baret's life is lost to us. In this regard, she is again similar to Cleopatra. Both women's place in history was assigned not just by men, but men who had an agenda that did not include providing a fair portrait of their subject. In Baret's case, the men who wrote the histories of the Bougainville expedition had agendas that led them to minimize her role and to distort the facts about her. A remarkable woman was reduced to a slightly scandalous side show, with her efforts barely acknowledged. Large parts of her story are glossed over or sanitized because the men writing the expedition journals were writing to their audiences and/or needed to salve their own consciences.

Ridley does an admirable job of resurrecting a more complete portrait from the sources available. She does not flinch from the darker implications that she uncovers- her reconstruction of what probably happened to Baret on New Ireland is particularly gripping. She always makes her sources clear, and explains her rationale for the assertions she makes. Some readers will find that this exposition of the sources makes the book more dense and the story more difficult to follow, and wish that Ridley had written a historical novel rather than the biography that she wrote. I am not in this camp. I enjoyed following the logical thread through the incomplete sources, and forming my own opinions about the assertions Ridley made. I came away from the book having learned about the French world of the 1700s, what it meant to be a scientist in that age, the conditions on the great sea voyages of the time, and, of course, about a remarkable woman who deserves to be rescued from the obscurity into which she had been consigned. I recommend it highly.

The publisher has been kind enough to provide me with a copy of the book to give away. If you are interested in winning the copy, just leave a comment. I'll enter all comments that do not specifically say they do not want to win the book into a random drawing on January 31, and pick a winner.

I received the review copy for free, but have not been otherwise compensated for this post.