I've had a bruiser of a day- within 30 minutes of getting up, I let Petunia burn her mouth on oatmeal, causing her to refuse to eat any breakfast. And then about an hour later, she threw up all over me (we think because her tummy was fully of snot from the cold she's getting over and not much else). So there was a lot of laundry to do and a little bit of sofa cleaning, too. Hubby took Pumpkin down to the Children's Museum during Petunia's naptime so that I could get some work done, but Petunia didn't cooperate. We took two walks (at least it was a beautiful day!) before I finally got her down for her nap roughly 30 minutes before it was supposed to be over. I managed to get 40 minutes of work done- just enough to meet the immediate needs, but not enough to get ahead at all. To top it all off, Petunia threw an absolute wobbler at bath time. She didn't want a bath (but she needed one- see the bit about throwing up, above). Then she didn't want out of the bath, but she didn't want to stay in, either. Then she didn't want to go get dressed.

Anyway, she's off reading stories and snuggling to sleep with Hubby now, and I am ignoring the fact that Pumpkin and I should be cleaning up her room and am letting her color while I blog, instead.

And I'm going to make myself feel better by indulging in a post that will make me smile, but will probably only be interesting to my parents. Hey, its my blog. I can do that.

One of the things that has been making me smile these days is my kids' art. I have no illusions that they are budding artistic geniuses, but something about the innocent outlook and straight-forward execution just makes me smile.

First, a few months ago, Pumpkin drew this picture of herself (on the left) and her "silly friends"- these were the friends she started playing with a lot when she was having trouble with B. at day care (that trouble seems to have passed, thankfully). One is another girl and one is a boy. She and her silly friends liked to run around and do silly things. I never really figured out what those things were, but she was happy- and that was nice, after having her come home sad about B.

I had hoped that we would get to keep this one, but she came across it recently, and decided that she wants to give it to the little girl depicted in the middle, whose mom just had twins, so all I'll have is this snapshot. 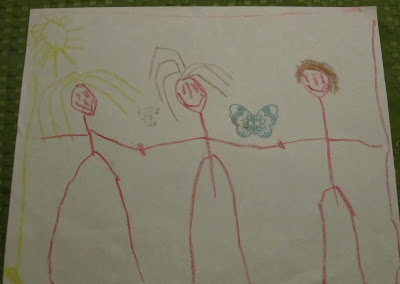 Next, Petunia recently announced that she was going to draw a fishy. And then she did! We're not sure if the fact that she actually drew a fish was an accident or not, but we were still impressed. She drew a fish in exactly the same way that I do. 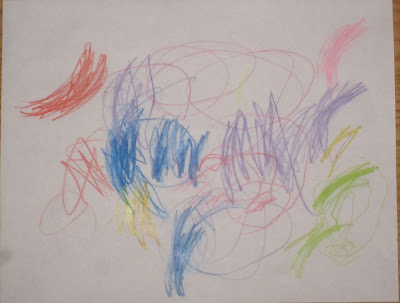 Here is a close up of the fishy. 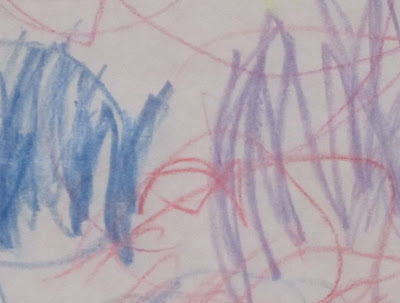 I like to think that this depiction of a small fish in a big, strange, but beautiful sea is a metaphor for the artist herself. She won't confirm that, though.