Yesterday, we took the kids to the beach. We packed the girls into the car and made it to our "usual" spot at Bonita Cove before 10:30- the time we'd said we'd meet some friends- without trouble. I remember when we first started taking Pumpkin to the beach that we struggled to get everything together, and always seemed to arrive later than we said we would. Now, packing for the beach is a fairly standard routine.

Still, it is a far bigger production than it was back in our early days in San Diego, when Hubby and I would just decide to go to the beach, change into our togs (as Hubby calls them), pack our books, a couple of water bottles, our IDs, and a little cash into my beach bag, swing our towels around our necks (the only way to carry them, according to Hubby), and walk out the door. In those days, we were living in an apartment in Pacific Beach, and could easily walk to the beach. We had to walk a particular route, because Hubby had a favorite block- Bayard, just north of Loring reminded him of New Zealand beach holidays. We'd hang out at the beach for an hour or two- reading, listening to the waves, occasionally going for a swim, and then we'd head home. We almost always stopped by our local pub and had a beer or two and some peanuts before heading home. Sometimes, we'd get so lost in conversation that we'd end up having more beer than was sensible, and eating a crappy frozen pizza heated up in the bar's toaster oven for dinner. (That bar has a proper kitchen now- it is perhaps good that it didn't back in those days, or we'd have spent far too many lazy Saturday evenings sitting on our stools, eating bar food, drinking a beer or two too many, talking and talking....)

Our beach trip yesterday was nowhere near that relaxed. Perhaps the years living walking distance to the beach, without dependents have spoiled the beach for me. But then again, maybe not. Pumpkin and Petunia built elaborate sand castles- with moats!- with Hubby and the two friends of Pumpkin's who also came. Petunia absolutely loved being towed around on a boogie board. She sat upright, balancing almost effortlessly and grinning with a joy purer than anything most adults can remember. There were meltdowns (mostly Pumpkin's, this time, but that is really just luck of the draw), but there was also fun. Even for the grown ups.

I guess the jury's out on the beach day thing.

We forgot to take our camera, which is a shame, because I doubt I'll be able to really remember that grin on Petunia's face for more than another day or two. Also, it left me with no photos with which to illustrate this post. So I opened up my photo library, thinking that perhaps I'd find a photo from one of those carefree beach days of my youth. No luck. This is as close as I got. 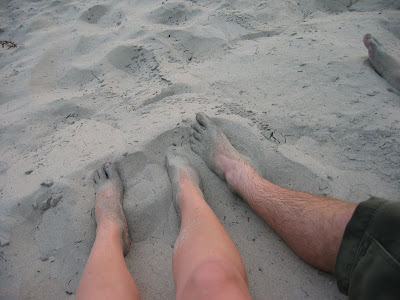 It is from a different sort of beach visit- from the other pictures taken at the same time, I can tell that it is near sunset, and we were probably heading down to the main part of Pacific Beach for dinner and decided to just stop and watch the sunset. That casual attitude towards when dinner needs to happen is another thing that has disappeared from our lives along with quick trips to the beach.

Something made me keep paging through my photos. It was weird to look at photos of me and Hubby from 10 years ago. We looked so young! It was also weird to realize that I still own many of the clothes I was photographed in almost ten years ago, and that they aren't even the oldest things in my closet.
I really should clean out my closet, but I think I'd keep that skirt. It still fits, mostly because it was a little loose back then.

I was feeling a little nostalgic for the travel we did before we had kids- the picture above isn't even from our "real" vacation that year! And then I got to 2007, when Pumpkin was born.

She was a skinny little bundle of wonder and sleeplessness. Don't let the many pictures of her sleeping fool you, this baby was one of the ones who make parents laugh a deranged sort of laugh at the phrase "sleep like a baby."
The pictures gloss over the rough parts, mostly. There is a series taken when I took her out to the Law Street park above the beach. Pumpkin is about 3 months old. The sky is a cloudless blue, and the ocean shimmers in the background. Pumpkin is laying tummy down on her blanket, her little head up and looking around- she developed those muscles early, because even then, she wanted to see everything. She's in my favorite pants from that age, which had little colored dots that made me think of microarrays and a waistband with stripes that made me think of gels, so I called them her "DNA pants." It looks like I'm a confident mom, taking my baby out exploring. In reality, I was barely holding myself together through most of my maternity leave, which was coming to an end. I rarely took Pumpkin on outings like this, because I was so desperate for sleep that I was obsessive about trying to be home for naptimes, and trying to get her to sleep on her own so that I could sleep, too. It rarely worked. And she was a high strung little baby, prone to inexplicable screaming fits that I seemed powerless to stop. I think if I could go back and give myself advice, I'd say: "Give up. She isn't going to sleep. And so what if she screams- she'll scream at home, too. Just go out and try to do things."

The strangest series of photos, though, are the ones from just a couple weeks after she was born. My husband flew back to New Zealand to be in a wedding of a very good friend (with my blessing) and my parents came over to help me out. Our photos are organized by date, so photos he took are interlaced with photos my parents and I took at home. One photo shows the luxurious room he had at the wedding, the next shows Pumpkin's first nap in the Moses basket my Mom and I bought after hearing someone at breastfeeding support group say that her baby slept better in her basket than her crib. A few photos later, my husband is on the golf course with the groom-to-be, playing his signature style of crappy golf. Then there's me with Pumpkin in her sling and an exhausted look on my face. I remember that morning. It was the day after I'd finally realized that I needed to cut dairy out of my diet, and I was trying to eat my cereal with rice milk. Blech. I soon switched to oatmeal (which I still eat for breakfast, now unable to fall back to cold cereal because Petunia expects to share my oatmeal with me).

That series of photos is unfair to my husband, who was fully involved in the night parenting before and after that trip, and was soon just as sleep deprived as I was. Or almost- he would occasionally hit a wall and just sleep through Pumpkin's cries, which is something I never could do. Still can't. Pumpkin, who usually sleeps through the night these days, woke up last night, and cried for Daddy. He went in, but I had to elbow him awake first.

Still, I found myself looking at those early photos of Pumpkin and turning into a cliche. I marveled at how such a little baby has turned into the big, tall (but still skinny) 5 year old of today, who reads and tonight asked me how to spell "asthma" because she thought maybe that was what the notice on the Play-Doh container was saying. (It wasn't. It was saying that the Play-Doh conformed to some ASTM standards.)

And I realized, I am looking forward to showing New York, Easter Island, and all the other cool places of this world to Pumpkin and Petunia, and that is better than being able to get ready for the beach in less than 10 minutes.

I've been feeling a little unmoored lately. I can't put my finger on why, and certainly haven't figured out the solution. I feel like I'm drifting through my life, not engaging enough to really direct it. But maybe I should just give in and go where the current takes me. I think that perhaps I gave up control when Pumpkin was born, and I just never realized it.
Posted by Cloud at 10:58 PM