Houston was our second stop on our Big Texas Trip. We found San Antonio and Austin to be easier cities to be a tourist in, but we still had a good time in Houston.

We started our touristing at the Natural History museum. They had a butterfly exhibit that we thought our girls would like- they are always excited to see a butterfly in our backyard. They had a really nice artificial environment built for the butterflies, with lots of pretty butterflies flying around. 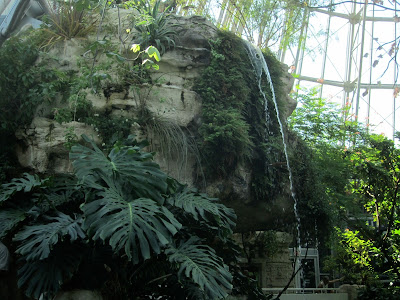 Something about the butterfly environment freaked them out, though, so we zoomed through it and spent the majority of our time looking at the museum displays before and after it, which were about all types of insects.

Our second stop of the day was a bigger hit. We walked over to the nearby Herman Park, where we rented paddleboats and pedaled around a nice artificial lake. The kids really liked this, but the grown ups were both a little freaked out by the fact that there were no seatbelts for the kids. We were all required to wear life jackets, but apparently we were just supposed to hope neither kid decided to go for a swim. Or got freaked out by the big heads on sticks that decorate the lake.


OK, they were actually sculptures representing the signs of the Chinese zodiac, but I still think they looked a bit freaky. The kids liked them, though, and stayed in their seats, so all was well. We took several circuits around the lake, and then turned in our boat and grabbed tickets for the kiddie train ride through the park.

After the morning of fun, we grabbed some Tex-Mex for lunch at Lupe Tortilla- which, despite the promises made in our guidebook, was just a regular old Tex-Mex place with no playground. But the food was fine, and the margaritas were good, so I won't complain.

On the recommendation from a friend, we had our afternoon snack at The Chocolate Bar. It was indeed good- and watching Petunia tuck into the giant piece of red velvet cake she'd picked out was pretty cute. But we should have planned a light dinner for the evening, instead of heading to a burger joint! No one really enjoyed their dinner all that much, unfortunately- particularly Petunia, who bit her cheek and was miserable anytime she tried to eat for the next several days.

In between snack and dinner, we played at a park and visited the Beer Can House- which is exactly what it sounds like, a house completely decorated with beer cans. 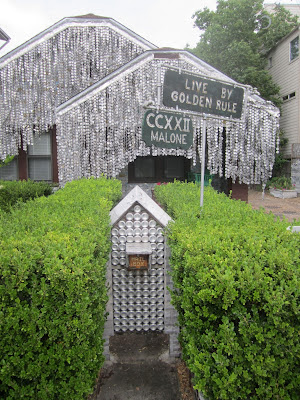 Apparently, some guy just started decorating his house with his empties. It is quite a sight. We weren't able to go in, but I'm glad we took the detour to see it.

The next day, we drove out to see the Space Center, which was the reason Hubby insisted that we visit Houston on this trip. He definitely enjoyed the visit and the tour- and the kids seemed interested, too.The ginormous rocket (Apollo 18, which never went anywhere) was definitely impressive.


After the visit, Pumpkin announced that she was going to be an astronaut on weekends. (During the week, she is going to be a teacher.)

We visited the Kemah boardwalk for lunch. It is a nice boardwalk area, and I could see spending more time there, particularly in the late afternoon/early evening- i.e., when it wasn't so hot. As it was, we let the kids have one spin on the carousel (a two story one!) and then headed for the air conditioned car and drove on to Galveston. It was an interesting drive, with scenery very different to what we're used to around San Diego, including Texas City, which appears to be one giant refinery.

Since the kids were napping in the backseat when we arrived in Galveston, we took a little driving tour of the city. Hubby was really amused by the giant houses on stilts. 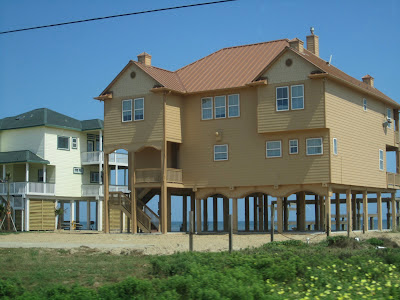 Once we decided that naptime could end, we parked near the Strand, and strolled around looking at the old buildings. We had ice cream for snack- I was hoping Petunia could eat that, despite her sore mouth. Petunia turned it down, but the rest of us enjoyed our first taste of the famous Blue Bell ice cream.

We also drove down to the beach and stuck our toes in the Gulf. Something freaked Petunia out, though (are you noticing a pattern?) and then she and Pumpkin both refused to touch the water again. 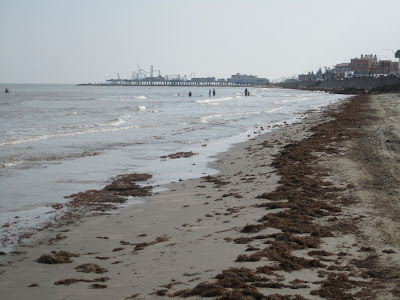 We had planned to stick around Galveston for dinner, but we just didn't feel like it, so we loaded the kids back into the car and headed back to Houston. This led to one of our most serendipitous discoveries of the trip: Woodrow's bar/restaurant. We got to eat pretty good Cajun food (and I got some yummy hush puppies.... mmmm... hush puppies....) and just relax without worrying to much about our kids, since (1) there was so many distractions for them that they mostly sat quietly, and (2) the hubbub was a dull roar, so no one would have heard them if they weren't quiet.

We had one more swim in our hotel pool before turning in for the night, ready to move on to Austin.
Posted by Cloud at 11:02 PM