I think I'd better finish writing up our Great Texas Trip of 2012 before the last stop fades from my memory- the trip was over two months ago now.

Our last stop was Austin. True to its reputation, it has a very different vibe than San Antonio or Houston- but we couldn't really appreciate the nightlife for which the city is famous, since we were traveling with our kids. We still had a good time, but of the three cities, it is the one where I most felt like we were missing something because we had kids with us. Namely, we missed out on Austin's legendary nightlife and music scene.

We did make it to Threadgill's- we went there for dinner the first night we were in town- but we didn't stay for the music. Instead, we headed down to the bridge over the river, to try to catch the bat flyout. It started out as a beautiful evening... 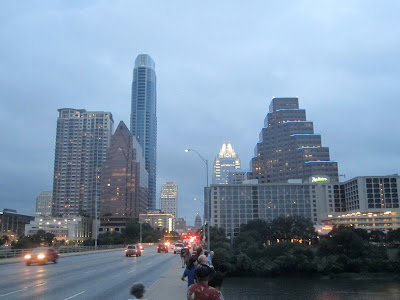 ... but it started to rain before the bats came out, so we headed back to the hotel without seeing the bats.

The next day, we walked up to see the capitol (my husband has a thing about seeing state capitols, and I've just given in to it).


It was a pleasant walk up one of the main streets of Austin, which gave us a flavor for the town. We even stopped at a funky little coffee shop for snack. It was basically a refurbished shipping container, with a nice garden out front- and sadly, its name is already gone from my memory.

We had lunch at La Condesa, which was our least kid-oriented meal of the trip (which is saying something, given that we basically ate in a bar our last night in Houston). The restaurant was more inline with our pre-kids tastes. I was a little nervous when we walked in, saw how stylish it was, and noted the lack of a kids menu (or other kids). But the staff were really welcoming, the kids did great, and the margaritas were awesome. I'm glad we stepped a little outside our comfort zone.

We went from sublime to... well, a little less than sublime for dinner. Hubby really wanted some BBQ, but we had a hard time finding a BBQ place that had anything on the menu that our kids might eat. He did some Googling during naptime and found a place called Dickey's. He also found a park near to the restaurant, so we had our plans set. The park was great- it is fun seeing the different playground equipment in different cities. This park had a cool standup twirling toy. It looked a bit like the sail on a windsurfing board, and was leaned at a slight angle, so that it was easy to spin on. The whole family had fun with that.

Dickey's turned out to be more like a fast food chain than a BBQ restaurant, but the food wasn't bad, and the staff were unbelievably friendly, even giving Pumpkin a second roll after she finished her first one. Hubby went for a full BBQ plate, but after the excess at lunch, I thought I'd go for something lighter and just ordered a stuffed baked potato. I had neglected to allow for the Texas-sizing of things: the potato I received was roughly the size of a football, and was smothered with cheese, bacon, and BBQ pork.

The next day, we decided to head to Zilker Park. I wanted to check out the Umlauf Sculpture Garden, but it wasn't open in the morning, so we just went to the playground and rode on the train, instead. On the plus side, we did finally see some live music: 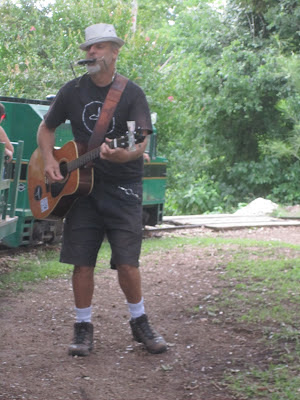 After the train ride, we headed over to the botanic garden, to see the dinosaur tracks. The tracks turned out to be a bit of a disappointment- they were from a small dinosaur, so weren't as impressive as any of us anticipated. 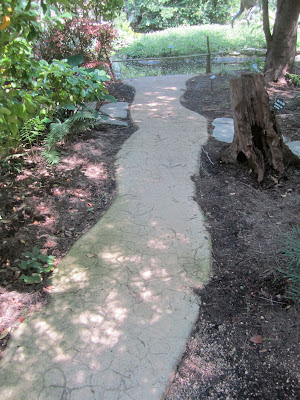 But the rest of the gardens were very nice, and we enjoyed them.

We had lunch at the Shady Grove, but were too hungry to wait for a table on the big shady patio, and ate inside instead. It was good, but not up to the standard we had set the previous day.

It was our last night in Austin, so we made sure to get down to the river for the bat fly out... only to be a bit disappointed by the spectacle. The kids could hardly see the bats, and even the grown ups had a hard time finding them. I think that if we ever try for the fly out again, we'll do it from the water- I suspect it is more impressive to have the bats fly over you rather than under you.

Despite the slight disappointment at the end, we had a great time in Austin, and on the trip as a whole. Thanks for a great time, Texas!
Posted by Cloud at 2:17 PM