I'm slowly getting into the holiday spirit. I'd resolved to have a more joyous and less stressful holiday season this year. I swore I'd only do Christmas-y things that I actually wanted to do, and therefore declined my company party. I made a plan, mapping holiday things I actually want to do to the available weekends between Thanksgiving and Christmas.

I'd love to say it is working wonderfully, but the truth is that I still struggle to let go of the pressure I inexplicably feel to get our various Christmas things "right" and just enjoy the season. But I'm doing better this year than last year, and I am actually turning my attention to Christmas shopping with something approaching the right spirit- i.e., I'm enjoying picking out gifts that will make people happy and not thinking of each gift as just another item to cross off my to do list.

This weekend, we put up the tree. This is another area in which I have to work to shut down my inner perfectionist. The tree is always secure but leaning strangely- for some reason, that doesn't bother my bona fide perfectionist husband, who got so involved in perfecting our picture sharing website this year that I finally gave up and signed up for Flikr- and the kids are at the age where the ornament distribution can only be described as lumpy. But the end result is still beautiful.

I also started my Christmas shopping. I started with our adopt-a-family, which is actually a nice way to ease into the spirit. The sometimes overwhelming toy options are narrowed down by the list provided by the parent in the family, and if you can't feel the Christmas spirit while buying toys for kids who otherwise wouldn't have any gifts then your name may be Grinch.

So, now that I'm thinking about toys, I might as well share some of the things I'm finding that I like. (If you want more toy ideas from me, you can check out my old post on the subject of toys that promote skills, which was itself a follow up to a guest post I did over at Mommy Shorts about Princess-phase friendly toys to promote skills.)

One of the items on my adopt-a-family list was a kitchen playset, for a two year old little girl. I stood on that aisle in the toy store for a very long time, trying to decide which toy to get. I know from our own experience that the sets with the cardboard boxes don't last long at all, and besides, I wanted to get this little girl a skill-building toy. The other toy on the list for her was a doll stroller. There is pretty much no way that a doll stroller is going to encourage math skills, so it was up to the kitchen set  to do that. I eventually settled on a Mix and Match Bakery Set

, because it included pretend cookies to cut out from a pretend sheet of dough, and I figured that would help with spatial reasoning. Also, it looks like fun. 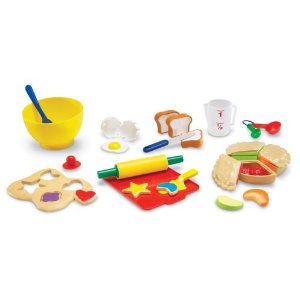 The mother had asked for a "princess playset" for her three year old girl. I struggled with that one, too. I do not feel it is my place to override the mother's toy requests, so I wanted to get something princess-y. But the other request for this little girl was also not a skill-building one. In the end LEGO rescued me. Did you know that Duplo now has the Disney princesses? Well, it does- in a square sort of way. I got the Snow White's Cottage

. And then I felt bad because there aren't really many blocks in that set, so I bought a standard tub of blocks

. (In the end, I got each of the three kids one extra toy, related to the toy on the list. I couldn't help myself.) 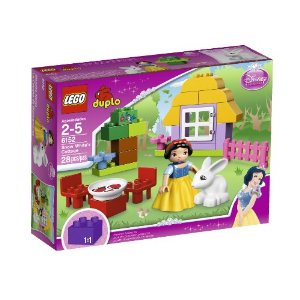 Later, I turned my attention to some of the other kids on my list, and also to coming up with ideas for my own kids, who are very lucky to have so many people who want to buy them things (and who usually ask us for ideas).


We've given many copies of Zingo

over the years, and there is someone on my list who will get one this year. It is a fun game, and good for helping young kids build matching skills- without boring them or their older siblings. I noticed while I was looking it up that they now have a numbers Zingo

and a Sight Words Zingo

, too. I suspect those are fun, as well, but I've never played them. 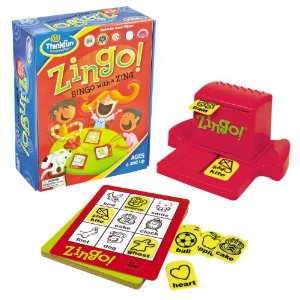 I am tempted by Bill and Betty Bricks

, which is made by the same company that makes the Castle Logix

toy that our girls like. In fact, that company (SmartGames

) has a lot of interesting looking toys. If you're looking for toys to promote logic and spatial reasoning and you want to go beyond LEGO and other blocks, check their options out. 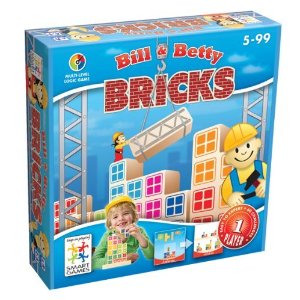 Another great building toy in disguise is a train set. We have both the wooden tracks and the plastic Fisher Price Thomas the Train TrackMaster

tracks. I know this is heresy, but we actually prefer the plastic set, at least for Petunia, who is the train nut right now. The plastic tracks are more forgiving of being tugged into position by a three year old who doesn't quite get the concept of making sure the two ends line up, and she likes the motorized trains. So we may be suggesting some more tracks for her for Christmas- we need at least one more expansion set

, so that we can have two joins and make more complex tracks. She's been asking for Rosie 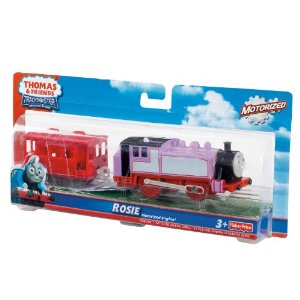 Even though I tend to write posts only about toys that promote math and science skills, I am in favor of kids having a wide range of toys to play with, including dolls and dress up sets and other toys that are more traditionally "girl toys." These toys promote skills, too- the good ones promote interpersonal skills and creativity. I bought a baby doll and a chef's outfit this weekend, and happily suggest dolls that my girls want when people ask for gift ideas. This post is getting a bit long, though- maybe I'll come back and write up some of our favorite dolls and "let's pretend" toys later.

What about you? What's on your toy shopping list this year? Any great finds you want to share in the comments?
Posted by Cloud at 10:28 PM