I'm reading an advance copy of Laura Vanderkam's upcoming eBook, What the Most Successful People Do on the Weekend

. Our weekends don't suck, but they could using some optimizing, so I'll be interested to see if I decide to make any systematic changes after I finish the book.

Reading it has already made me a little more conscious of how we're spending our weekends, though. This weekend is a busy one (but not so busy that I can't sit down and write a blog post...) so I had rather low expectations of it going in. It started on Friday night with a trip to the Del Mar Holiday of Lights, which is a large lights display at the Del Mar racetrack.

You can drive around the track looking at the lights or you can take a hayride. We had planned to do the hayride last weekend with a large group of Pumpkin's friends, but it was rained out. Most of the others rebooked for next weekend. We have other plans for next weekend, so we rebooked for last night. It was fun, and Petunia in particular was impressed with the lights.

Her highlight of the evening, though, was a chance to sit on Santa's lap and tell him what she wants for Christmas (a shopping cart with food), which surprised me, because last year she screamed at the sight of Santa and wouldn't go near him. We had planned to skip Santa this year, so this was a spur of the moment thing because Petunia insisted when she Santa.

The hay on the hayride really got my allergies going, forcing me to forgo our usual Friday night beers and just take some Benadryl and go to bed. I hate missing Friday night beers, so I was disappointed. Also, that is when Mr. Snarky and I plan out our weekend, which I find to be very useful for ensuring our weekend does not get swallowed up by chores, so I went to bed with even lower expectations for the rest of the weekend.

But today has been surprisingly good. Both girls had birthday parties to go to, so we had to split up. I took Petunia to her party while Mr. Snarky took Pumpkin to gymnastics and her party. Petunia had a lot of fun at the party, and I had fun chatting with the other parents. I don't know the parents of her classmates that well yet, and I was glad to get a chance to get to know them better.

Petunia fell asleep in the car on the way home, and refused to continue her nap once we got home. She did agree to spend roughly an hour of "quiet time" on the sofa, watching shows, allowing me to get some laundry going and do some of the work I need to do (the hayride necessitated leaving work early, so I need to catch up). But then she wanted to play. We did some easy mazes

, and then she wanted to go outside for a "scooter walk". That didn't last long- we went a few houses, and then came back and got in the wagon instead, and I pulled her around the block.

We had a lot of fun, and I remembered the trick to really enjoying time with a 3 year old: just do whatever she wants to do.  (Which, incidentally, is what we're doing now- Pumpkin and Petunia are sort of playing together in Pumpkin's room, but really both of them are just doing their own thing: Pumpkin's playing school and Petunia is setting up an elaborate "Happy Birthday party." I am sitting on Pumpkin's bed with my laptop.)

Tomorrow, both kids will have a Chinese lesson at our house, and then we'll split up again, as I take Pumpkin on a promised shopping trip to buy a fancy holiday dress and Mr. Snarky will get some Petunia time. My sister will come over for dinner, which will end the weekend on a nice note.

So from such low expectations, I think we'll have a pretty nice weekend.

Come to think of it, last weekend was pretty good, too. We put up our Christmas tree, and while I stressed far more than I should have in the lead up to that, it turned out very nice, and the kids had a lot of fun decorating it. 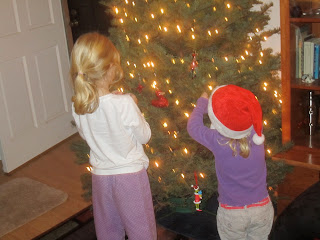 Then, on Sunday afternoon, we did something Mr. Snarky has been wanting to do for awhile. We packed Pumpkin's scooter (actually Mr. Snarky's, but he lends it to her- she has requested her own one from Santa this year) and Petunia's tricycle into the back of our Mazda5 and drove down to the Quivera Basin section of Mission Bay for a scenic walk. 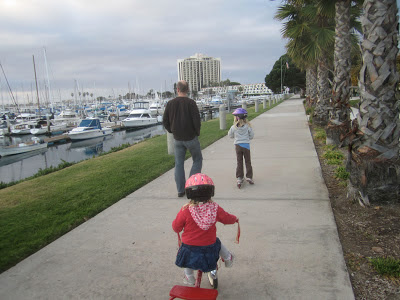 The kids had a great time, and the adults did, too. We even saw some Christmas decorations. 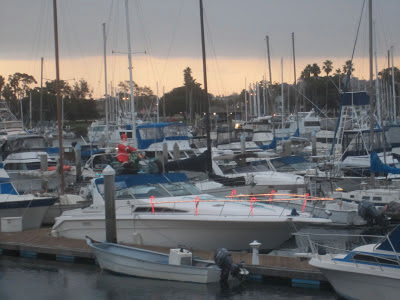 So maybe my weekends don't need as much help as I think they do!

What are you up to this weekend? Do you think your weekends are as rejuvenating and fun as you want them to be?
Posted by Cloud at 5:59 PM