Last weekend, my parents came over and watched the kids so that Mr. Snarky and I could take a little break. We only decided to do this a couple of weeks ago, so we didn't have much time to plan the getaway- and since I'd been out sick so much of January, I was super busy at work and behind on my to do list at home. Therefore, it fell to Mr. Snarky to plan this two night trip. We weren't sure where we wanted to go, but we knew we wanted to explore some place new. He Googled and he Google Earthed and he eventually decided on San Pedro.

Whenever we told someone where we were going, they had one of two reactions: (1) Where is that? or (2) Why in the world are you going there?

San Pedro is the Port of Los Angeles and it is very much a working port, not a picturesque marina (although there is, in fact, a marina there). We went there because it looked interesting and we could find a decent hotel that was walking distance to bars and restaurants. I think the deciding factor for Mr. Snarky was the fact that there was a British pub walking distance from our hotel, and it had steak and mushroom pie on the menu. I have to admit, I was skeptical, too. We even discussed the possibility of cancelling our reservation and moving for the second night if it was terrible.

But in fact, we had a wonderful time. This was one of our favorite getaways to date. San Pedro is not as swanky as most of the places we've gone for our getaways. There were fewer tourists around and occasionally the streets felt a bit deserted. But we still felt safe and it was definitely interesting, and made us feel more like we were exploring than we've felt for awhile. And we like exploring.

We arrived on Saturday late afternoon, and decided we needed an adult beverage to get into the getaway mood. We briefly considered just having a drink at our hotel bar (we stayed at the Crowne Plaza, which was just a couple of blocks from the water), but though better of it, and instead walked over to the port, thinking we'd check out the touristy Ports O'Call village. We did eventually make it there, but we found a much better place for our drinks. The first thing we passed was an Acapulco Mexican restaurant. We considered stopping in for drinks on their waterfront patio, but it was packed and we thought maybe we could do better than a chain restaurant for our drinks, so we kept going.

We passed an outdoor stage area, with a bunch of people watching, and laughing uproariously to, a cross-dressing comedian perform in Spanish. This was our first inkling that something interesting awaited, but we don't speak Spanish well enough to appreciate such an act, so we kept going, and stumbled into something awesome. There were a series of fish markets/food courts with bars. They were absolutely packed full of people. I'd guess that almost all of them were locals. 90% were Hispanic- there was a lot of Spanish being spoken. There were families, and groups of friends out for happy hour, and people clearly out on dates. It was a crowded, boisterous scene unlike anything else I've seen in the US. The closest comparison we could come up with was the food courts we ate at in Singapore and Malaysia.

We weren't hungry yet, and we had other plans for dinner, so we passed on the food (which looked good, if a bit greasy) but headed to one of the bars. We ended up at Cafe International, but there were other options, too. Most people were getting a red concoction with what looked like chili powder on the rim. Mr. Snarky was intrigued and wanted to know what they were. Just as he was asking the man behind the counter, I figured it out- they were micheladas. Very big micheladas. Mr. Snarky had seen beer going into glasses with red stuff at the bottom, so he had a rough idea of what he was ordering, and decided to give it a try. I decided to stick with a margarita, but I tried a sip of Mr. Snarky's michelada. It was not bad. I still prefer margaritas, though. 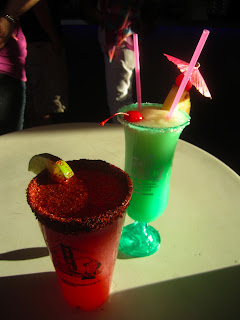 We enjoyed our drinks and wandered through the rest of the food court area- which had at least two mariachi bands and one other entertainment area with what might have been bilingual karaoke. Then we headed over to our original destination, and confirmed that Ports O'Call is a typical seaside tourist trap. It had the usual shops and some restaurants, but we walked back to our hotel confident that we'd had our drinks at the best spot at the port.

We had dinner at the English pub, as planned. The Whale and Ale is a pleasant pub, and my husband enjoyed his steak and mushroom pie, even if it was not a canonical pie in his eyes. I am not a huge fan of English pub food, but found a pasta dish that I liked and thought the soda bread was wonderful. Plus I had a wonderful sticky toffee pudding for dessert. Whenever I hear someone say that traditional English food is all terrible, I refer them to sticky toffee pudding. Also thick cut pub chips with salt and vinegar. Really, English cuisine gets unfairly maligned.

We also enjoyed fine pints of Boddingtons and an unexpected musical program: the Welsh Choir of Southern California led the pub in a sing-a-long. We were seated a little far from the action (and next to a loud man telling his date about his opinions on "Hindu reincarnation theory"), but we still enjoyed the show.

After dinner, we headed over to the nearby San Pedro Brewing Company for a couple of pints and some live music before heading back to the hotel. I had a quite drinkable Shanghai Red. Mr. Snarky was disappointed to find that their IPA wasn't on tap, so he had their pilsner, but then found the allure of Green Flash Black IPA on tap too much to resist and switched to that.

Amazingly, I slept until 9 a.m. the next day. The hotel's blinds were quite effective. Or maybe it was the lack of children. I can never sleep past 7:30 at home, even when Mr. Snarky is trying to let me sleep in. Sleeping in late felt wonderfully decadent, but I didn't want to sleep the day away, so we got up and headed to breakfast, and then we drove to the Palos Verdes peninsula for a little hiking. Palos Verdes is a very wealthy part of L.A.- we drove past horse riders on dedicated horse paths on our way in, and on the way out we passed a sign that said "Seaside Second Homes - From $1.25 Million." I really wanted to know why those homes were advertised specifically as second homes, but didn't think we'd be able to pull off a visit to the sales office to find out.

Palos Verdes is certainly a beautiful area. The hike we took started at Del Cerro Park, which had a spectacular view of its own.


But we hiked down to a grassy hill for a different spectacular view of the ocean. It was a very nice hike.

After the hike, we stopped at a lookout near the Point Vicente Lighthouse and enjoyed a view that included a pod of dolphins frolicking in the distance. We unfortunately did not have our binoculars with us, but even from afar, a pod of frolicking dolphins is a cool sight.

We also stopped off at Wayfarers Chapel, which I only discovered thanks to the guest guide in our hotel room. It was amazing. I feel completely vindicated in my habit of reading hotel guest guides now.

The chapel was designed by Lloyd Wright, son of Frank Lloyd Wright, and is constructed of glass with wooden beams, surrounded by redwoods. I am not a religious person, and neither is my husband, but we both remarked on the feeling of reverence this chapel invoked. This is not so unusual for me- I often feel the reverence that I think the church builders must have had. But it is unusual for my husband. I think the last time we both remarked on this feeling in a church was in Christopher Wren's Church of St. Stephen Wallbrook, which we visited during a walking tour of London. So perhaps we have a mutual appreciation for beautiful but obscure churches. Regardless, if you are ever in the area, I recommend a visit to Wayfarers Chapel. It is free, and well worth the small investment in time to visit.

We headed back to the hotel after leaving the chapel, stopping off briefly in the Pt. Fermin area of San Pedro to take a picture of the truly impressive pier and breakwater at the port. It was partially obscured by the clouds rolling in, but was still an impressive sight.

Then we called it quits on sightseeing, and just enjoyed the rest of our time away from the kids, returning to that Acapulco restaurant we'd spurned the night before for margaritas and chips and salsa with a view, followed a little later by a leisurely Italian meal at Neil's Pasta and Seafood, which appears to be something of a local institution (and indeed served good food).

All in all, it was an excellent little getaway, and I found myself again amazing my colleagues at work by wholeheartedly recommending a visit to San Pedro. If you're flying in from a landlocked locale looking for an idyllic beach vacation, this spot may not be for you (although I think there may be some idyllic beaches in Palos Verdes), but as Southern Californians looking for a local spot to explore, San Pedro is among the best we've found.
Posted by Cloud at 10:13 PM