We spent most of our Colorado vacation in the mountains, or at least near them, with one significant detour: after we left Aspen, we drove south and east to Alamosa. Mr. Snarky had read about the relatively new Great Sand Dunes National Park, and really wanted to see it.

The drive from Aspen to Alamosa was one of the longer ones of our vacation, but we still managed to get checked into the hotel and even get some laundry done before it was time for dinner. We headed to Calvillo's, a Mexican restaurant that was highly rated by the online reviews. The food was pretty good, but the entertainment was even better. There was a duo performing Mexican folk songs. The man had a beautiful voice and played better than decent rhythm guitar. The woman played intricate finger-picked melodies on lead guitar and sang a solid harmony. Together, they were absolutely wonderful. Unfortunately, they left before I found out who they were or put a tip in their jar. I was planning to do so on our way out, and they finished performing before we finished eating.

The next morning we headed out to the dunes as soon as we could- we wanted to get some time on the dunes before it got too hot.

The dunes were beautiful. The clouds passing overhead made shadows on the sand, which pretty much blew Pumpkin's mind. She was amazed that clouds could make such pretty patterns, and that the arrival of a shadow could have such a profound effect on the temperature.

Both kids enjoyed climbing up the dunes, but Petunia was a bit freaked out by the way the sand gave out under her feet when we tried to go down a dune. Between that, the fact that climbing up the dune had tired her out, and her realization that we would not get to the "top," she was just done. She sat down on the sand and refused to move. She screamed that she wanted to go up to the top, not down, but then wouldn't walk in any direction. In the end, I had to pick her up and carry her down the dune while she screamed and kicked. It was a good workout.

The visit to the national park was rescued in Petunia's eyes by Mr. Snarky's decision to buy the kids Junior Ranger vests at the shop, and a cool sand dune making exhibit they had in the visitor's center. I am glad we visited the park, because the dunes and the surrounding grasslands are starkly beautiful. I love the feeling of being in such an open, expansive landscape.

However, if you're reading this and trying to decide whether or not to visit the park, I'd say it is great with a seven year old, but maybe a bit to much for a four and a half year old.

We had lunch at the only restaurant near the park, the cafe at the Great Sand Dunes Oasis. They had fry bread! I was so happy.

After lunch, we took a short and hot hike up to see Zapata Falls. Actually, Petunia and I picked pretty rocks out of the stream while Mr. Snarky and Pumpkin went to look at the falls. Pumpkin didn't care for that part of the hike- it involved picking your way across wet rocks. She didn't have her water shoes on so her running shoes got wet, and she slipped a bit and was freaked out by that. So now it was Pumpkin's turn to be unimpressed with a hike.

We made it up to both kids by spending the rest of the afternoon in the water park that was attached to our hotel. It had a small kids' slide shaped like a frog that Petunia went down roughly 1000 times. That number may not even be an exaggeration. I sat in the shallow water and watched her slide for at least an hour. She gave a little delighted scream each time she slid down into the water. Pumpkin liked the slide, too, and also liked swimming in the deep end. We were forgiven for the hiking in the morning, and everyone headed out to dinner in a pretty good mood.

Dinner was at the San Luis Valley Brewing Company. Mr. Snarky loved the light in the room. 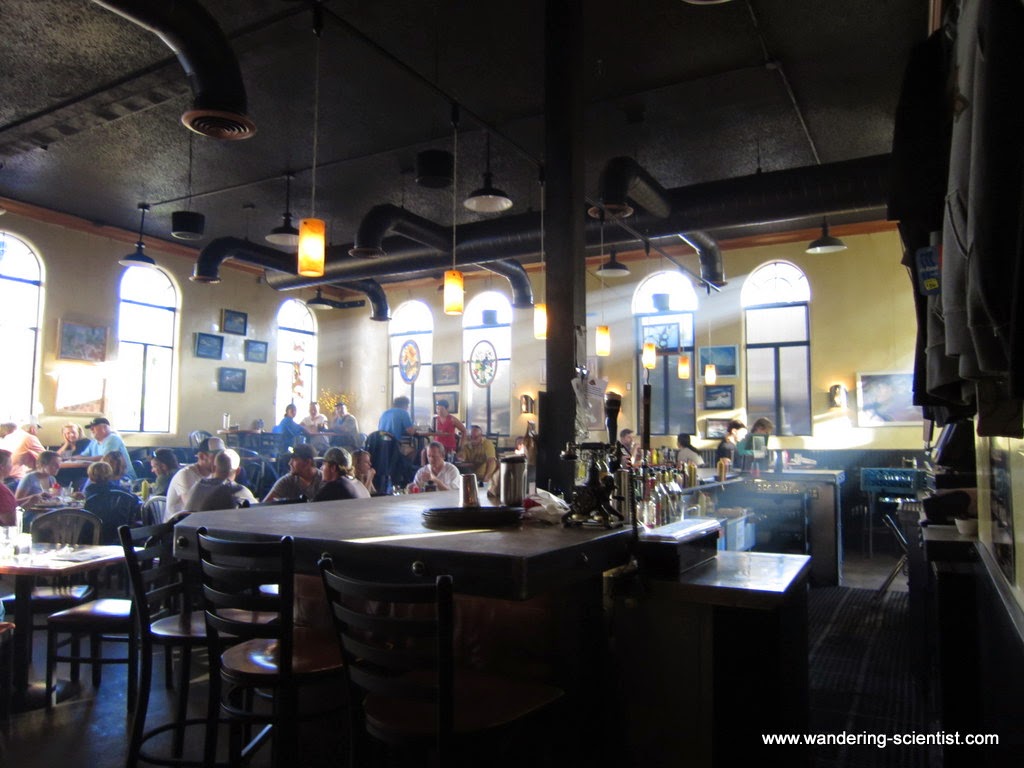 And we tried a Kiwi Blonde beer that was surprisingly great. Fruity beers are not usually something either of us really likes, but this one was so good that Mr. Snarky asked about how it was brewed, and the brewmaster came out and gave him the recipe.

After dinner, we wandered around the downtown area a bit, had desert at a Nestle Toll House franchise (something I did not even know existed), and then took a slightly scenic tour through town on our way back to our hotel. We left Alamosa the next morning happy that we had come.
Posted by Cloud at 7:31 PM