The drive from Moab to Salt Lake City is a long one. Google Maps told me it would take almost four hours. Therefore, we tried to break it up. Unfortunately, the first part of the drive is through incredibly empty country. It is also very sparse scenery. I have a higher appreciation than most for desert landscapes, and even I tired of the Book Cliffs before we left them. I found parts of the drive between Moab and our first stop in Price pretty, but there was just too much of it!

But we made it through, and pulled in to the Subway we'd picked out for lunch right at lunch time... and right behind an entire Little League team. Luckily, we weren't in a hurry.

After lunch, we drove to the nearby Utah State University Eastern Prehistoric Museum. This is a small but extremely well done museum. I had picked it as a stop location because of its dinosaur bones: the large Cleveland Lloyd Dinosaur Quarry is nearby. In addition to dinosaur bones, the museum had a good exhibit about the early human inhabitants of the area.


The grown ups really liked the exhibits, but for the kids the draw was the children's area near the dino bones. There was a pretend dig site and Petunia in particular didn't want to do much else at the museum but play in that.


At first I was a little annoyed that Petunia refused to spend much time looking at the bones—or talking to the real dinosaur scientists who were setting up a new exhibit and happy to talk to passing children!—but I eventually gave up caring. Petunia had been really excited about this stop. She wore her dino t-shirt and the crop pants I'd patched with a piece of fabric with a dino print. And what she found most compelling when she got to the museum was the fake dig. Who was I to argue?

Since Petunia insisted on playing in the kids area for so long, I ended up chatting with another mother there with her kid. They were locals, and before long, her husband dropped by, too. He told us about how the miners in the area would find fossilized dinosaur footprints in the coal seams. He said there is a house in a nearby town (I think he said it was in Helper) that has a large T. rex footprint fossil in its wall! I was tempted to take a little detour to go try to see that, but we decided to just stick with our original plan instead.

After we left Price, the scenery got greener and more variable. Sadly, since it was after lunch, Mr. Snarky slept through much of it. But it made for a nice drive for me!

Our next stop was in Provo, the home of Brigham Young University. I had found several shops that were potential places for us to get a mid-afternoon treat. We settled on a Bahama Buck's snowcone shop, which was near a park. The kids loved their snowcones, although we didn't go in for any of the fancy options available. And then we all enjoyed stretching our legs at the park.

From Provo, we drove on to Salt Lake City and checked into our hotel, which was a Doubletree on the outskirts of downtown. We walked to the Squatters Brew Pub for dinner that night and turned in early.

The next day, we got up and headed towards Temple Square. We stopped at a coffee shop for breakfast, but that didn't work so well. Neither kid was all that happy with the pastry options and it was a good thing I had snacks in my bag give them instead. (We learned our lesson: all other breakfasts in SLC were at Starbucks, known to have food options my children will eat.)

Another problem with the breakfast stop was it lacked a bathroom... and Petunia decided she needed one. So we headed to the Salt Palace, SLC's convention center. It had a gift shop and bathrooms. And an art installation outside that Pumpkin enjoyed:


After our pit stop, we headed over to Temple Square. Mr. Snarky was determined that we would do a guided tour of Temple Square, despite my warning that it would just be used as a chance to proselytize to us. However, he didn't think the kids could stand the length of time of the regular tour (I think it was an hour long), so he asked for and got us a special tour. So we had two very enthusiastic missionaries all to ourselves!


They were very nice and we were very polite and everyone got through the tour without embarrassment, although the kids did seem puzzled as to why we were insisting they sit through this. I figure it was a good actual example of my frequent admonition to them that we respect everyone's religion, even if we don't believe what they believe.

Still, we were all glad to head across the street to the City Creek Mall to get lunch. We had a nice lunch at an Italian restaurant, and then headed out again, this time to see the State Capitol.


It is a fine capitol, as capitols go, but I don't share Mr. Snarky's enthusiasm for them.

We had a nice walk back towards town, along the creek that shows up in the City Creek Mall. I posted a bit about the signs we saw on our walk earlier. The walk was a little hot and long for the kids, though, so we stopped and got ice cream when I saw a fancy ice cream truck. That was definitely just for the kids. Yep.

After a short rest at our hotel, we headed out again. Mr. Snarky saw a park on the map that we could stop at on our way to the Planetarium, which we planned to see before dinner. But the park was really full of homeless people, to the point that they were sleeping on the play structures, so we skipped that and substituted the Children's Museum for the Planetarium to make up for the lost play time and stop Petunia from whining about it.

The Children's Museum is in the Gateway Mall, which had these swing tables that our kids thought were awesome. We thought they looked impractical. 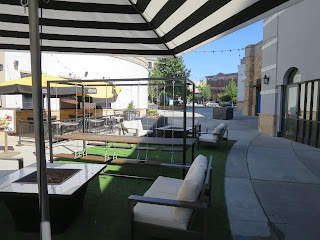 The kids had fun at the museum, and we had dinner at the CPK in the Gateway mall before catching the TRAX train back to our hotel.

The next day, we started with my pick for "most important thing to do in SLC": The Tracy Aviary. It was smaller than I expected but still quite good. We started by watching the show, which was fun and well done. Then we wandered around and saw a bunch of birds. We were surprised to find some keas, which looked unimpressed by the heat, but came out when prompted to show off their ability to turn knobs to get you to drop quarters in their donation bin.


After the aviary, we meant to play at the playground in Liberty Park, but the playground wasn't shady enough and the equipment was too hot. So we headed on to the Sugar House district for lunch at the Wasquatch brew pub.

Then we drove on to This Is the Place, a heritage park that the kids quite enjoyed, but from which I don't really have any good pictures. Mr. Snarky quite liked it, too. I perhaps burned out on settler historical sites as a child, because my favorite part of the place was the little doughnuts we bought. (OK, all joking aside, I found it a little too "rah rah hardy settlers" without really confronting what happened to the Native Americans who were living on the land before the settlers arrived. But... I will also admit that I didn't give it a fair chance. They had a Native American section set up with members of a local tribe there to demonstrate weaving and other Native crafts and talk about how the tribes lived at the time the settlers arrived. Perhaps in that section there was an honest reckoning. I did not go check it out because the kids rightly pointed out that what we'd visited in Monument Valley was better. But even so, that was one small part of the park, and the rest of the park was devoted to demonstrating just how awesome and hardy those Mormon settlers were. And fair enough, they were hardy. So were the Native Americans who'd been living in that area for centuries.)

Moving on... after we left the heritage park, we drove back to the hotel and decided to try again to see the Planetarium. The kids lobbied for and got Subway for dinner (our kids think the weirdest things are treats). First, we accidentally visited the SLC Library, which I'd read was impressive. We took the wrong train and got off at the library stop to go back to catch the correct train. We decided to make the most of our mistake and wandered over to see the library. We arrived too late to go inside, but I agree, the building is impressive.


So was the Planetarium. Honestly, it might have been my favorite stop in SLC (although the aviary was pretty good, too). The kids had a lot of fun with the exhibits, which I thought were really well done. I was particularly impressed with the Mars Rover exhibit. They had four rovers that you could move around... but only by sending programmed instructions. The programming was simple (you click on arrows), but it did a really good job of demonstrating what "driving a rover" on a distant planet is like: asynchronous.


There was also a planetary weather station exhibit where the kids got to read weather reports from various planets. The kids loved that.

After we finished up at the Planetarium, we took the TRAX back to our hotel. We'd had a great visit to Salt Lake City. Next time, we leave town and see a lot of salt. At the rate I'm going, I'll probably post on that in October. (Just kidding. I'll try to pick up the pace!)
Posted by Cloud at 11:21 PM