Time for the next installment of the Western Road Trip! In my last installment, we visited Salt Lake City. Our next main stop was in Carson City, Nevada. But first, we had to get across northern Nevada. When we planned the trip, I looked at the big expanse across Nevada with a bit of dread, but it turned out to be a beautiful drive.

Before we got to Nevada, though, we had a couple more stops in Utah, one planned and one spur of the moment. The planned stop was at the Great Salt Lake State Park, so that we could dip our toes in the lake and say we'd at least seen the lake in Salt Lake City.

The kids were a bit underwhelmed with the lake: it was slimy and muddy and there were sooo many flies.

Luckily, no one minded that lunch was late, because before we got to lunch we made an impromptu stop at a rest area that turned out to be the Bonneville Salt Flats. The fact that this was an unplanned stop was a break down in my planning process. If I'd known that these salt flats were along our route, I would definitely have planned to stop there. But no harm done: we stopped and we all thought the salt flats were really cool.

We threw "salt balls" at each other (the fall apart quickly, so none hit their marks) and just marveled at the weird landscape. Other people drove their cars out onto the flats. The flats are the location of a lot of land speed records over the years, and there is an active racing association that holds races on the flats every year, if the weather permits.

We chose not to drive our loaded Mazda 5 minivan onto the flats, and instead headed on to West Wendover, for lunch at a Pizza Hut.

After lunch, we drove on to Elko. We arrived too late to catch any of the Basque festival that had been held over the weekend, but the kids did enjoy a swim in our hotel pool. Since it was Sunday night and the night after the festival wrapped up, most of the restaurants in the downtown area were closed, but we enjoyed a short stroll around and admired some large boots. 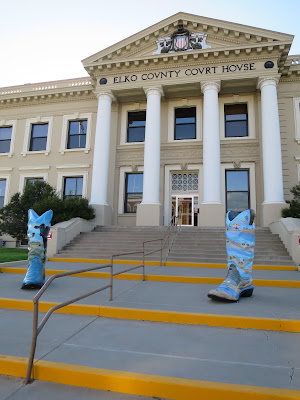 We found an open restaurant for dinner, and then headed back to the hotel for the night.

The next day, we had breakfast at the Denny's next to our hotel before continuing our drive west. The notable thing about that was the row of Tesla car chargers outside the restaurant. I was a bit surprised to see them outside a Denny's in Elko, but they got quite a bit of use: we counted three different Teslas charging up while we had breakfast.

Since we hadn't had any Basque food in Elko, Mr. Snarky really wanted to eat at the Basque restaurant I'd flagged as a possible lunch stop in Winnemucca. It was called The Martin Hotel, and the food was wonderful. I didn't want a big lunch, so I had a sandwich, but made it interesting by choosing the garlic soup as my starter (it was delicious). Mr. Snarky went all out and had lamb and garlic mashed potatoes and I think he had something approaching a religious experience eating it. 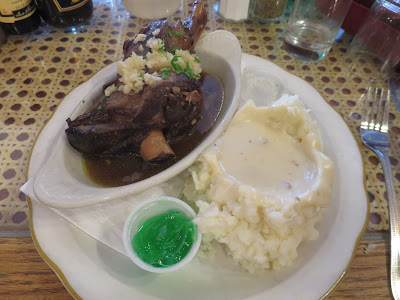 After lunch, we drove on. I found the landscape pretty, but knew from experience it was the sort of landscape I'd fail to capture in a picture, so you'll just have to take my word for it. There were grasslands rising into hills and mountains, a big blue sky, and the sense of openness that is one of my favorite things about landscapes in the American West.

Our next stop for the day was for "snack"- we stopped for ice cream at a place called Steve's Homemade Ice Cream, in a strip mall in Fernley, NV. The ice cream was delicious.

From Fernley, it was just another hour to Carson City. I'll pick up the story there next time.
Posted by Cloud at 8:41 AM