Thank you for all the ideas and commiseration yesterday!

We got Pumpkin back into the bath tonight. With a lot of bubbles on our noses and patience, she eventually agreed to sit on my lap in the tub, and from there I eased her into the water. By the end, she was splashing like she used to and saying "noooo...." when asked if she was ready to get out.

Pumpkin's still biting, so we still have to work on that. (And I wouldn't be surprised if the bath thing continues to be harder than it used to be for awhile.)

It was a hard night last night. Pumpkin woke up a lot, and was hard to console. We suspect she is having trouble with the four(!) teeth (canines or incisors- I can't keep them straight) that are coming in now. At 3:30, I finally kicked Hubby out of bed and sent him to the sofa so that Pumpkin could come to bed with me. She slept, but tossed and turned for about 30-45 minutes before she really settled in and let me sleep. Even then, she wanted to be right up against me, with her little face smashed into mine and her hands wrapped in my hair. So I didn't get the best sleep (this is why we don't make more use of cosleeping- Pumpkin is not the best bed partner). I had an all day leadership training session today at work, which was something I would rather not have done on so little sleep. So, to cheer myself up, tonight I'd rather not think about the hard stuff, and want to focus on some of the cute and wonderful things about Pumpkin:

1. Once, about three weeks ago, the dog next door was whining because its owners had gone away and left it outside. Pumpkin was concerned, so I told her the dog was crying, and did the sign for crying (tracing tears on my cheeks). Now, anytime Pumpkin hears a dog whine, many times when she hears a dog bark, and sometimes for no reason we can discern, she looks earnestly at me, says "woof, woof", and does the sign for crying. This is one of the reasons I don't think the random biting incidents mean that she's completely lacking in empathy.

2. Hubby was outside cutting some branches off of bushes in our backyard this evening. He had previously taken the recycling out (what a good Hubby!) and the indoor recycling bins, which are just plastic trash cans, were still outside. Pumpkin dragged one over to Hubby and put it at his feet, clearly intending that he put the branches in it, much like she uses one of her buckets to gather leaves.

3. Pumpkin can say "Boppy" very clearly. She occasionally goes to her room, announces "Boppy!", picks it up, and drags it to the living room so that I can nurse her. She has also started saying "Boppy, Boppy, Boppy!" in the middle of the night when she wakes up and wants to nurse. This is a mixture of cute and annoying. 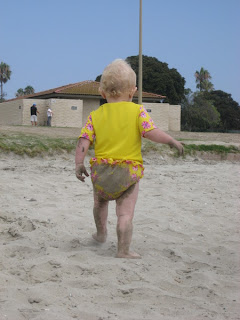