No One Said It Would Be Easy

This parenting thing is kicking my butt right now. Pumpkin is still biting at day care, and I'm feeling more and more like we're "that family"- you know, the one the teachers all complain about in the break room. Since Pumpkin doesn't really bite at home, we have been trying a Playful Parenting based approach to see if we can get the idea in her head that she should use her words to protest things, not her teeth. I've been having Pumpkin's bear and bunny play with toys and steal them from each other- but Pumpkin is still biting, although she now apparently says "No, no!" after she bites. She is also prone to turn to her bear and shake her finger and say "No, no!" This is very cute, but that wasn't the goal of the exercise.

When I picked Pumpkin up from day care today and found the note indicating that she'd bitten two other kids, the teacher suggested we try modeling the behavior we want (i.e., Pumpkin should say "No, no!" when someone steals her toy, but not bite them first). I thought I had conveyed this plan to Hubby, but when I stole the car keys from him, he came at me with play hitting, which was not the idea at all. So I guess we'll know the technique works if Pumpkin starts hitting instead of biting. We'll have to try again tomorrow, after Hubby has had a chance to rehearse his lines.

Pumpkin has also suddenly gone from a child who screams when she is taken out of the bath to a child who screams when we try to put her in the bath. We don't really have any idea what might have caused this change, and nothing we've tried has convinced her to allow us to wash her without her screaming. She loves bubbles, so I bought some bubble bath. Nope. She likes to play with the water from the hose outside, so we tried a shower with the hand held shower we have in our master bathroom. Nope. Tonight, I tried running a bath in the big bath tub (instead of her little plastic tub) and getting in it first. Nope. I'm out of ideas, so I think we'll just keep trying the bath with Mommy idea for a few days. We seemed to be making progress tonight- she was standing next to the bath tub without her diaper on. And then she peed on the floor and got very upset by that, and wouldn't stop screaming until I got out of the bath and gave her a big hug.

We do have some good news in one area, though- Pumpkin will now eat apples and bananas. The only catch is that they have to be in the whole, unadulterated form. Here is what an apple looks like when Pumpkin is done with it: 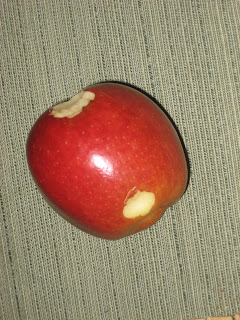 We gave her a whole apple at one point, because she kept pointing at the fruit bowl and saying "ball". Now she can say "apple" (well, it sounds a bit like "baa-pple"), and occasionally insists on having one. My fruit consumption has gone way up, since I have to finish the nibbled on apples and bananas. Maybe that will counter-balance the stress I'm feeling about all the biting....
Posted by Cloud at 9:05 PM