This week has been a frustrating one at work, and Pumpkin has entered a new phase of two-ness- now, with extra stubbornness focus*! And less sleep**! Right now, the thought of writing up our entire trip to Oregon is too daunting, so I'll do it a little bit at a time.

After a delightful day and a half visiting friends in the suburbs of Portland, we headed to Mount Hood. We were extremely lucky with weather during our entire trip- we only had one rainy day. The day we drove to Mount Hood was beautiful and sunny, and the mountain was spectacular: 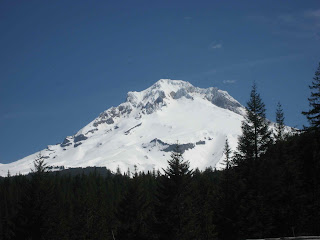 The real reason for the drive, though, was to introduce our little SoCal girl to snow. She talked excitedly about this plan during our drive up: "We go to MOUNTAIN. We see SNOW." She was excited to see the snow from the window of the car as we drove toward Timberline Lodge. When we actually got her out of the car and into the snow, though, she was less impressed. She didn't really want to stand in the snow, and she certainly didn't want to touch it. If you ask her about the trip now, she'll tell you (with some prompting) that she went to a mountain and she saw snow and "I not touch it."

On the bright side, Pumpkin's refusal to play in the snow made us head in for lunch a little early. We beat the crowds and had our lunch at possibly the best table in the house. 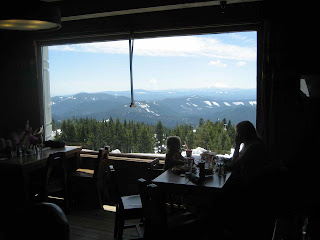 After lunch, we left the mountain and drove on to Hood River. We bought Pumpkin the first of the two new puzzles she acquired on the trip, and then found a nice spot for some ice cream (me and Pumpkin) and coffee (Hubby). The spot had a cool fountain next to it, which consisted of jets of water shooting up from a grate. Pumpkin had a great time playing in it. This was already our second experience with cool, kid friendly fountains in Oregon (the first was in the Rose Gardens in Portland), and there were more to come. I guess one of the benefits of having a lot of rain is that you don't have to feel bad about putting up fountains for the kids to play in.

From Hood River, we drove on to Cascade Locks, which is where we spent the night. Our hotel (the Best Western, which had just about the friendliest staff I have ever met in a hotel) was right on the water. We didn't take a good picture of the view from our balcony, but this one, taken from a nearby park, captures the scene well: 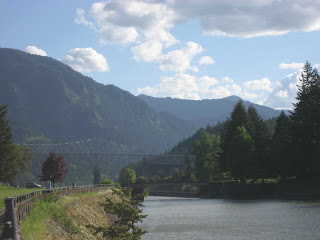 Pumpkin's memories of Cascade Locks are of going to the park with Daddy ("in my STROLLER") and seeing TRAINS! She really enjoyed the trains we saw all along the gorge.

The following day was our one day of rain on the trip. It didn't rain all day, and other than the downpour that caught us as we tried to leave lunch, it mostly sprinkled. We still managed to stop in and see some sturgeon at the fish hatchery and visit two waterfalls, including the Multnomah Falls. This photo doesn't do the falls justice, but doesn't Pumpkin look cute in her little rain jacket? We own one because day care asked us to send one in this the winter. I think she wore it once. 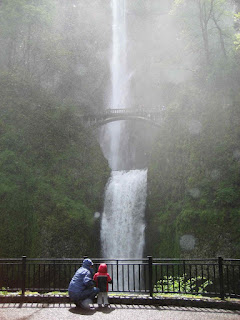 After the Multnomah Falls, we drove to the McMenamin's Edgefield for lunch. The McMenamin's brewpub chain specializes in buying historic old buildings and putting hotels and/or pubs in them. We had hoped to stay at the Edgefield, but they were booked at the time we wanted to stay, so we had to content ourselves with lunch in their pub. The lunch was nice, and Hubby reports that the beer was excellent.

After lunch, we put Pumpkin in her car seat for her nap and drove to Salem. I'll continue the trip story there another day.

* According to the much-recommended Raising Your Spirited Child

, by Mary Sheedy Kurcinka, I shouldn't put negative labels on Pumpkin's spirited behavior. She is focused, not stubborn, and energetic, not hyper. I suppose I should give Hubby the same courtesy, but he'll stay stubborn and hyper until he agrees that I'm intense, not emotional.

** Seriously. Much less sleep. Last night, we couldn't get her to sleep before 10. She still woke up at 7 a.m., happy as can be and full of energy. Tonight, she went to sleep at 9:30, but that was after I spent literally 50 minutes laying next to her while she played with her hair and told me random things.