This is the second part of our Oregon trip story. The first part covers our visit to Mt. Hood and the Columbia River Gorge.

We needed a stop between the Gorge and the coast, so we spent one night in Salem. It was a good stop in terms of limiting the amount of driving we did in any one day. However, it was not quite as interesting as I'd hoped it would be. I'd chosen to stop in Salem because our guidebook mentioned a couple of good sounding kids-friendly sights: a carousel and the A.G. Gilbert Children's museum. The carousel was indeed a hit- it was Pumpkin's first ride on a carousel, so we chose a horse that didn't go up and down. She is still telling us occasionally about how she rode on a horsey and it went "'roun' and 'roun' and 'roun'", most memorably when she was almost asleep a few nights ago. She was lying next to me, playing with my hair, and I thought she was basically asleep. I was thinking I could extract my hair from her grip and get up. Then she sat bolt upright and announced in her best outside voice "I rode on a horsey and it went roun' and roun' and roun'!" Clearly, we should visit our local carousel sometime.

The children's museum had a lot of potential, too. They had great exhibits, most of which had at least some appeal for kids as young as Pumpkin. She particularly liked the room that used an infrared sensor (I think) to show outlines of the people in the room, with a short time history of movement. This picture doesn't really do it justice, but we didn't have time to try to get a better one, because approximately 20 school age kids were about to pile into the room: 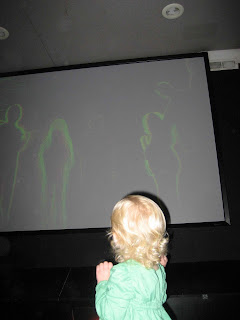 And that was the problem with the museum. They had a sign up when we arrived warning that it was a "high volume" day, and they weren't joking. There were at least three school groups there. It is not a big place. We let Pumpkin check out some of the main exhibits, but then we escaped to the relative peace of the toddler room- she was the only toddler there, and thankfully, the staff and/or school group monitors kept the few big kids who wanted to come in from doing so. We left the museum feeling like it really hadn't been worth the stop- it was clearly a very cool museum, but not on the day we visited.

Hubby was a little more pleased with the stop in Salem than I was, because he got to go see the state capitol building (he's "collecting" these) and because he really liked the brew pub where we ate lunch before leaving town (the Ram Restaurant and Big Horn Brewery).

The stay in Newport was more universally successful. Due to a slight miscommunication when booking our room, we had a two bedroom suite, so Pumpkin had her own room, which was nice. The suite also had an amazing view: 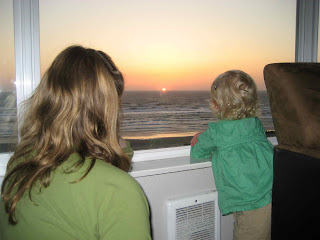 This was a good thing, because it was far too windy to spend any significant time on the beach. Pumpkin and Hubby did go down for a short visit, but the main thing Pumpkin took from that was that she climbed back up the stairs from the beach ALL BY HERSELF.

The sea lions on the bayfront were also a big hit. Pumpkin liked to mimic their sound. At first, she thought they say "Ar, ar, ar", but after watching them for awhile over two days, she decided that they really say "Mmm, mmmm, mmm", which may not be as cute, but is more accurate. 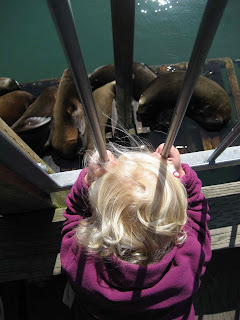 One of the reasons I picked Newport as our destination on the Oregon coast was the Oregon Coast Aquarium. This was definitely not a disappointment- well, except for the bit where the octopus was hiding. Pumpkin still tells me that we didn't see the octopus, because he was asleep. We did see sea otters, sea lions, puffins, and lots and lots of fish, though. Pumpkin was particularly impressed with the walk-through "tunnels"- "I see fishies TUMMIES!"

My only real complaint with Newport is that we couldn't find a playground. We asked at our hotel, and were led seriously astray. So we Googled, and found a potential playground up the coast a bit at a state beach. We headed out to check out the beach and the playground, planning to visit one of Newport's two lighthouses on our way back. Well, the beach was so windy that Pumpkin couldn't even look straight ahead and the playground turned out to be deep inside the campground at the beach. We walked and walked and eventually found it. It was empty except for us and some workers installing new toddler equipment. Luckily, Pumpkin (who'd been told we were going to a playground, and wasn't about to let us forget that) didn't seem to mind. You can't tell in this picture, but she's jumping on the bridge, perhaps a bit perplexed by its definite non-bounciness (most of the bridges at the playgrounds we frequent at home bounce): 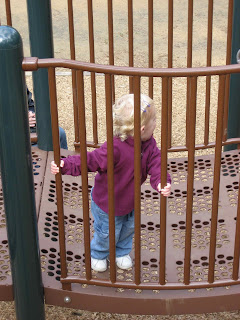 We did stop at the lighthouse on our way back. I'd post a picture, but it was too windy to take any nice ones.

Despite the constant gale force wind anytime we got near the actual coast, we enjoyed our stay in Newport, and left satisfied with our visit. We wanted to see at least one other spot on the coast, so we stopped in at Depoes Bay for lunch on our way back to Portland. We noted the continuing presence of the strong wind, appreciated the picturesque "world's smallest harbor", looked for but failed to see the blowholes our guidebook mentioned, bought me a final bag full of salt water taffy (why don't we sell that at the beach here?) and left the coast ready for some warmer, less gusty weather, which we found almost as soon as we turned the car inland. I'll write up our impressions of Portland later.
Posted by Cloud at 7:07 PM