When I started planning our California road trip, my husband made only one request- he wanted to go to Sacramento. This may seem like an odd request, but he has a thing about visiting state capitols, and he was bothered by the fact that he hadn't seen ours. I agreed, even though Sacramento was quite a bit out of the way, given the rest of the itinerary I had in mind. The only place in the itinerary that it made any sense at all to go to Sacramento was between Sequoia and Monterey- but I also didn't really want to try to drive from Sequoia to Sacramento in one day. My goal on this road trip was to keep the driving to ~two hours per day- i.e., the length of Petunia's nap.

I pulled out my map, and looked for something that was approximately halfway between Three Rivers and Sacramento. Fresno wasn't far enough. Modesto was too far. But Merced- it was just right. So we decided that we'd stop in Merced for the night. The plan was to find a hotel with a decent looking pool, and spend the afternoon swimming. The problem was that none of the hotels on offer were particularly inspiring, so I dithered more on this hotel selection than any other on the trip, trying to decide which mediocre option was the best.

In the end, I went for room size- so we stayed in a place with two full bedrooms, which was nice. The pool was decent, but there was no spa. It turns out that my little girls are wimps and don't like to be cold when swimming (good luck to them when they decide they want to start swimming in the ocean!) so next time I pick a hotel solely for an afternoon's worth of swimming, I should make sure there is a spa.

But it all worked out OK, because the shorter than anticipated swim left us with time on our hands before dinner, and forced us to go out and explore the one place my pre-trip Google searching had identified as a sight to see in Merced: Applegate Park. It turned out to be worth the effort.

The drive to the park took us past the iconic theater that the literature in our room told us was in the process of being renovated. 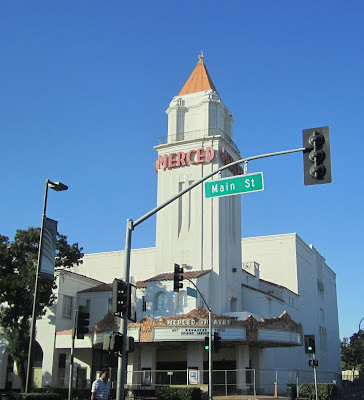 But we didn't stop to explore Main Street. We headed straight to the park, which turned out to be a large, grassy expanse, shaded by mature trees. Petunia chased squirrels. 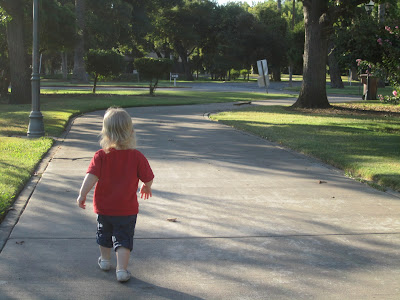 And the rest of us chased her. Then we all enjoyed a stroll along the really rather picturesque river. 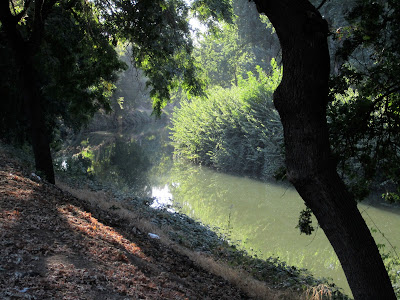 Then the girls played on the good (but crowded) playground until it was time to go back to the hotel and get ready for dinner. We had dinner at Mi Casa Cafe, a Mexican restaurant across the street from our hotel. It was very good- my only complaint was that they didn't have margaritas, forcing me to "settle" for a Negro Modelo instead.

While I snuggled with Petunia that night, waiting for her to go to sleep, I thought about how Merced felt like a visit to an alternate universe, in which I had stayed strictly in science and gone for a tenure track job. I could see alternate universe me realizing at some point that she was unlikely to land at Harvard, or even a well known state school, and deciding to try for a position at a place like UC Merced, and (if I was lucky) landing it, and ending up living in a town like Merced. I don't think I would have been unhappy, although it is a far cry from San Diego in terms of things to do. But it would definitely have been a very different sort of life.

Then Petunia fell asleep, and I shook off thoughts of alternative life courses and headed into the second bedroom to have another beer with Hubby, and plan for the next day.

We needed something to do before lunch, and pretty much the only thing that was open and even moderately interesting to us was the Castle Air Museum. It is on a former air base, and has a large collection of planes, particularly from the WWII era. We thought there was a chance that Pumpkin might think it was sort of cool.

She didn't. But Hubby did- he ended up taking a lot of pictures, including this one, of a plane that made me glad that Pumpkin isn't really reading yet: 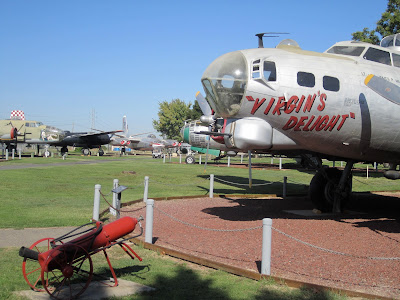 I'm not ready to explain the meaning of that airplane name to her.

If Pumpkin was unimpressed, Petunia was positively bored and annoyed. I ended up spending the majority of our visit sitting on a bench under the wings of the B-52, nursing her. And I got a mosquito bite on my back in the process, which annoyed me for the rest of the trip. Still, it was a cool place to sit and nurse. 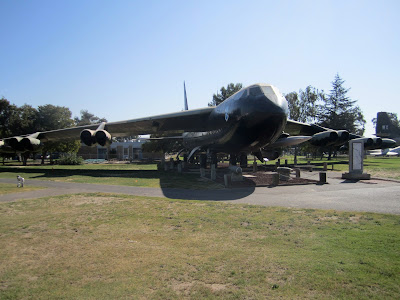 Finally, as we were leaving, Pumpkin and Petunia found something they liked- some coin operated rides. 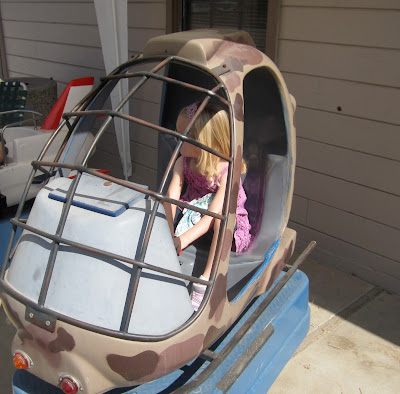 We hung out there while Hubby went over and looked at the stealth bomber. 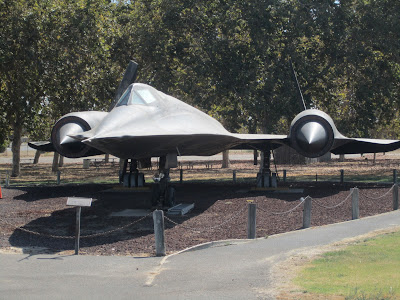 We tried to explain its importance to Pumpkin, but failed miserably. I think it would have been easier to explain "Virgin's Delight."

We packed into the car and headed off in search of lunch. My pre-trip research had turned up some pizza places, but we weren't in the mood for that. We ended up at a Jamba Juice. Petunia loved her smoothie. Pumpkin said it wasn't as good as the ones I make, and wouldn't drink it. In retrospect, this was no big deal. One lunch of Pop Chips and Pirates Booty won't kill her. At the time, though, I was mightily annoyed with her.  Then Petunia started dancing in her chair to whatever top 40 music was playing. That was cute enough to break my bad mood, and we headed off towards Sacramento reasonably happy with our stop in the Merced area.