Sacramento was one of the biggest surprises of our recent car trip. As I mentioned in my post about Merced, Sacramento was added to our itinerary solely because Hubby wanted to see the capitol.

And we did see the capitol: 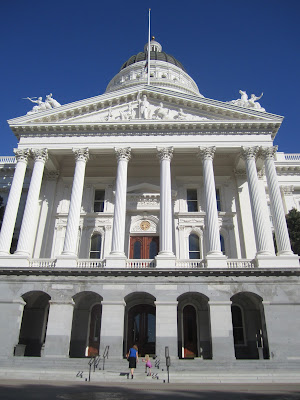 (That's me and Pumpkin heading up the stairs. If you look closely, you can see that she is positively bounding up them.)

Hubby didn't want to go in. He felt underdressed in his flip flops. (This cracked me up, since I have yet to find another occasion- not even our wedding- for which he thought flip flops were not appropriate attire.) But Pumpkin really wanted to go in, so in we went. It is a good thing we did, because, as I described in the trip wrap up post, Petunia roaring at the bear statue outside the governor's office was awesome.

The view from the capitol steps was also pretty nice. 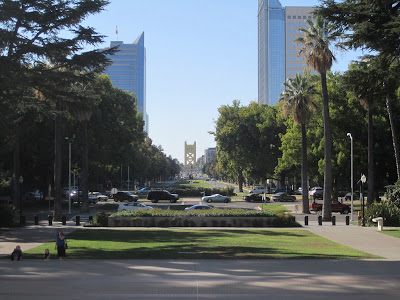 We had walked to the capitol by way of old town (which was nice, in a tourist-trappy sort of way) and an outdoor mall. After we finished our capitol visit, we headed back to that mall for dinner- there was a little play area we thought would amuse the girls (it did), and there was the River City Brewing Company brew pub that provided us with a nice dinner accompanied by some good beers.

We walked back to our hotel by way of old town again. We were amazed that Pumpkin was still walking along with only the occasional protest- we had walked a lot and at home she complains if we try to make her walk the six or so blocks home from the park (granted, those are mostly uphill blocks). But that night in Sacramento, she not only walked home without protesting, she joined her sister for some dancing outside one of the riverfront restaurants, which I unfortunately can't show you because all of our pictures suck too much. You'll have to take my word for it- they were pretty cute.

The view that greeted us the next morning- and the precious minutes of distracted children that it provided- made me glad that I'd paid the extra $20 or so for a river view room. Pumpkin is still talking about the "gold bridge". Petunia seemed most enamored with the many birds flying over the river. 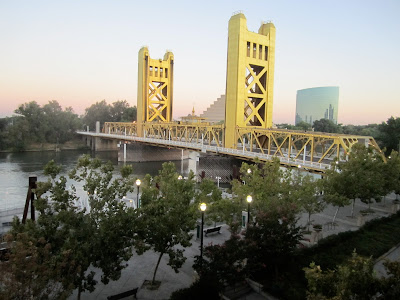 (We stayed at the Embassy Suites, if you're curious.)

After breakfast, we headed to the premier attraction for preschoolers in Sacramento: Fairytale Town! Both girls had fun, but Pumpkin was clearly right in their target age, and she had a blast. Seeing (and sitting in!) Cinderella's carriage may have been the highlight for her, but it is hard to say. She also loved pretending to be a pirate: 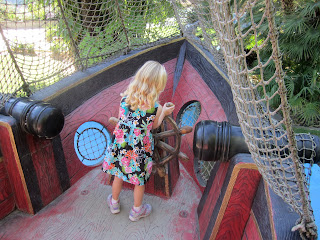 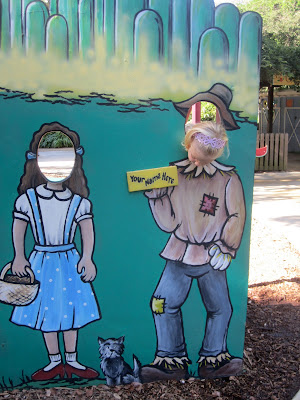 And running along the Crooked Mile path and playing on the playground in Sherwood Forest.

Petunia liked those things, too, but she really loved the slides, especially this one: 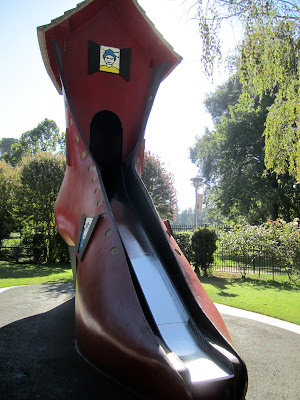 We finished up at Fairytale Town a little later than I intended, and we got to lunch at the Rubicon Brewing Company a little past the optimal time: the girls were hungry, and tired, and lunch did not go as well as the beer deserved. But we still left Sacramento very happy that we had come- even if it meant we had a long drive in front of us to get to our next stop, in Monterey.
Posted by Cloud at 2:57 PM