I'm finally making time to write up the first day of our California Car Trip. I didn't intend for this post to be so long in coming, but I came back from vacation to immediately turn around and attend a local conference, then we had Petunia's two year birthday party and an out of town guest, and Hubby had a week long series of meetings at work, starting at 8 or 8:30 every day and ending no earlier than 5. (Seriously, who schedules something like this? I think they should send the partners of all the employees flowers, because this sort of thing upsets the delicate balance of things....) But now Petunia is home sick- a sore throat, from the looks of it, but nothing serious, and she's already on the mend- and that week long series of meetings at Hubby's work means that I'm taking the day off with her. So I am turning my attention from the string of DVDs she likes to watch when she's sick and writing a post.

Anyway, back to the trip... We left home after dinner and bath on Thursday night, and drove a couple of hours north and east to Pasadena. Petunia slept most of the way (it was pretty much her bedtime when we left). Pumpkin looked out the window, insisted on listening to her music, and asked us a seemingly endless stream of questions before she finally fell asleep, too. It was a good start to the trip.

I had booked us into a Howard Johnson near Pasadena City College- I figured there was no point being in the thick of the trendier part of Pasadena, since we were arriving late and leaving after breakfast to go to Kidspace, our first tourist stop on the trip. The hotel worked well for us, and was at least $100 cheaper than the option I had looked at in the more happening part of town, so that was at least one lodging win for the trip.

Kidspace is a pretty cool place. Unbelievably, I have not a single "failed" photo from this stop (i.e., a photo without one of my kids' faces in it), so I cannot provide photographic evidence- you'll just have to take my word for it. We started in the toddler room, which was a pretty standard play area for young toddlers. It was nice, but nothing special. We should have skipped it- but it did keep the kids entertained while we studied the map and figured out what we should go see. There was a splash fountain, and an indoor exhibit with some really well-done climbing features that Pumpkin decided looked to scary for her. They had a small bug exhibit. Pumpkin thought it was cool to see a tarantula, while Petunia preferred the butterflies. There was an outdoor garden with some great water play areas. But the highlight for our girls was definitely the tricycles- there was an area for preschoolers with marked lanes and traffic signs. Pumpkin absolutely loved stopping at the stop signs. We can only hope that this is foreshadowing for her qualities as a driver when she is older! There were also some smaller trikes in a less structured area for toddlers. Petunia was thrilled to have her own trike to ride. She is too little for the ones we have at home. She pushed the trike around with her feet with a big grin on her face, and screamed at us when we told her it was time to go.

We had lunch at the surprisingly decent Kidspace cafe, spent a little time on the good public playground outside the museum, drove by the Rose Bowl (it was literally right next door), and then headed out of town. 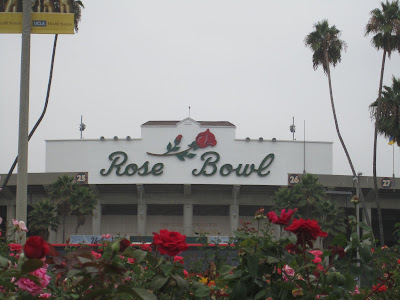 Our eventual destination was Three Rivers, which would serve as our base for a visit to Sequoia National Park. I didn't want to make the entire four hour drive in one go, though, so we stopped in Bakersfield. The drive to Bakersfield was surprisingly pretty- the freeway cuts through hills that in September are the color of browned butter, beautiful from a distance, but parched and scrubby looking up close. The hills are dotted with grey boulders and muted green trees that look perpetually windswept.

I had picked out the California Living Museum as a good stop in Bakersfield, and I was right. It is a small zoo, focused entirely on animals native to California. The size was perfect for a short stop,  and they have done a good job landscaping it to give you the feeling of space. 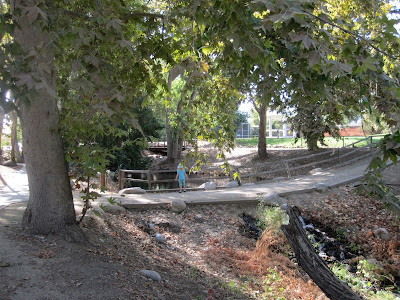 We spent a lot of time looking at the mountain lions and bobcats, saying "meow". 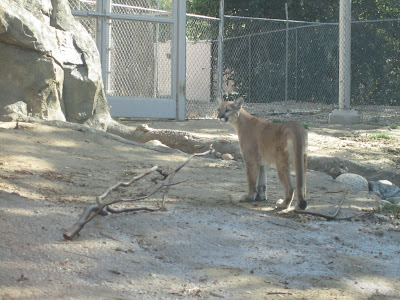 We also spent a fair amount of time looking at the bears, saying "rarrr". 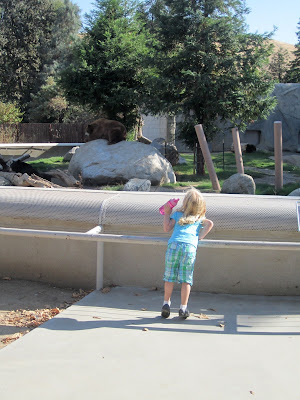 And Petunia waved bye-bye every time we walked away from an animal, which was just as cute as it sounds.

All in all, it was a good stop. From there, we headed to the restaurant I'd picked out for dinner: a local brew pub called Lengthwise. 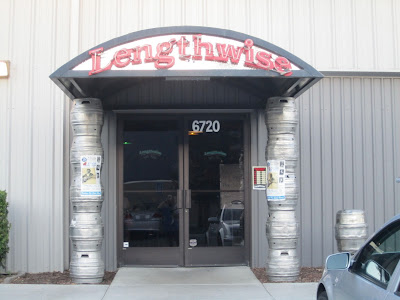 The food and beer were good, not great, but they had an old Ms. PacMan game in the corner, and we all got a kick out of that. Pumpkin and I both took turns playing, but Hubby was the real master. We eventually tore him away from the console and left. We stopped by a park to run some of the wiggles out, and then strapped everyone into our car and head off for our next stop.
Posted by Cloud at 1:06 PM