Halloween was really good. The girls were both butterflies. This was probably the last year in which I could make them match- and I also thought a good year to have them match, to minimize meltdowns from Petunia about differences in costume accessories. So I talked Pumpkin into being a butterfly by telling her that I'd get her a leotard (a "ballerina shirt"- something long coveted) and letting her choose the color butterfly from the options available on Amazon. She chose purple

. And then I picked the most unbelievably adorable monarch butterfly costume

that worked out beautifully, although I found maneuvering down hallways in them difficult.)

Anyway, here are a couple of pictures of Pumpkinfly 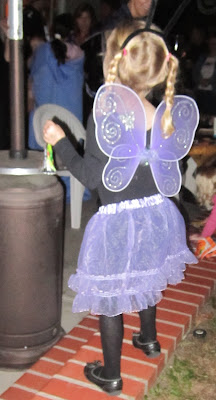 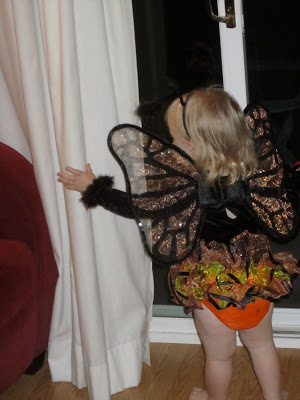 We had tights for Petunia, too- but I don't have a decent rear photo of her in those. I do have a very, very cute photo of her running across the playground to us at our daycare's Halloween parade. She was walking around the circuit like she was supposed to until she caught sight of us. Then she took off running across the playground, with a huge smile on her face. That pretty much made my week.

The actual trick-or-treating went well, too. Pumpkin said "Trick or treat!" and "Thank you" and "Happy Halloween" at every house, with minimal prompting. Petunia said "twi-twee" everywhere, endearing herself to pretty much everyone. I called my husband and told him to be ready to capture that on video when we got home. But she wouldn't do it at our house, preferring instead to try to unload her candy into our candy bowl. She is not at all interested in eating candy, but she absolutely loved trick-or-treating. After almost every house, she said "more" and toddled off after her sister to the next house.

I carved a pumpkin on Saturday, so that our house would be appropriately marked as welcoming of trick-or-treaters, and because Pumpkin likes having one. Petunia was fascinated by the process. Pumpkin was not, but she did get her hands on our camera for the first time, producing some really arty photos (as well as some random photos of the sky). I think Santa needs to bring her a camera. Or maybe he needs to bring Mommy and Daddy a new camera, and we can just give her the old one. We'll have to think carefully about what to ask him to bring. 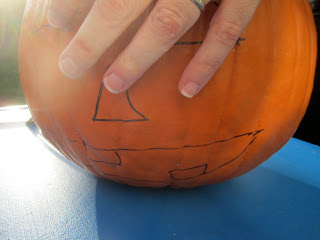 Helpful tip #2: If you screw up and draw a line across the teeth of your jack-o-lantern with a sharpie, you can remove that line with rubbing alcohol.

Here is the final product, in all its glory: 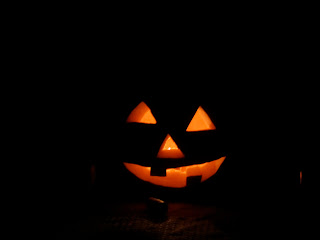 I was quite surprised by this, because although she has figured out addition, I'd never heard her extend it to multiplication before. I asked her how she knew, but she couldn't say. So I asked her how many four fours made. She thought for a minute, and then answered "16." We got up to six fours and then we got home.

She is also reading now. She can read The Foot Book

pretty much all by herself, and tonight she read Cookie's Week

to me with very little help. Halfway through, she confessed that she was using the pictures to help her get some of the words (she was also sounding some out). I told her that was OK, everyone did that, and that the more she practiced, the more words she'd learn, and before we knew it, she'd be reading books without any pictures, just like Mommy does. To her credit, she refrained from telling me that I read lame books and should get some with pictures.

Mimi and Boppa, be warned: she's looking forward to impressing you by reading lots of books at Thanksgiving.

Anyone with suggestions for other easy books to read should put them in the comments, because I'm struggling with that. I think she might be able to tackle some more Dr. Seuss, if I choose carefully. But I'd like other ideas, too.

We didn't set out to teach Pumpkin to read (or, for that matter, do multiplication) before kindergarten. "Everyone" says that is a bad idea, and conventional wisdom predicts that now she will be bored in kindergarten. But she is interested, and I refuse to prevent her from learning things she is interested in.

Besides, I dispute what "everyone" says. I knew how to read when I started kindergarten and I remember loving the letter workbooks we had. There was one for each letter and they had a textured letter on the cover. I think there were various activities inside, perhaps including cutting (which I was not as good at- and, to this day, my family teases me because I cannot cut a straight line).

So it will probably all be OK.

Particularly if we go with the Spanish immersion school- which is what Pumpkin wants. We've explained that the teacher will only speak Spanish, and she might not understand at first. But she says that she doesn't care. She wants to go and learn Spanish so that she can go back to day care and speak it with Miss M., one of her favorite teachers.

We've told her that there is a chance we won't get in to that school, and she always pulls a pouty face when we say that.

We haven't told her that there is a chance we won't even try. It is time to get serious about this school choice thing. I've started trying to figure out how we're going to evaluate schools, and so far, I have a growing list of questions to ask on visits, but nothing more. Readers who have already been through this exercise (particularly in California!) are encouraged to give me helpful hints in the comments. Its only fair- I gave you hints about how to handle jack-o-lantern mistakes!

I have meatier posts planned soon, I promise. But I'm getting slammed at work, for reasons that I (of course) can't post about (at least not yet). Suffice to say that the choice about Pumpkin's kindergarten will be made during a whirlwind of work activity. But so far, it isn't spilling over into home too much, except in that I can't find the mental energy to write thoughtful posts. That is a symptom of the fact that I haven't organized the giant boatload of work that has landed on my desk, so I'm holding a bunch of disorganized "do this, but do that first" thoughts in my head. Once I sort that out, I'll have more mental space, and will post interesting things soon. I have a post full of righteous indignation at some internet feminists on behalf of my husband (who remains blissfully ignorant of how he has been maligned- or willed out of existence, really) and another post about how I stay happy (downright chipper!) in the face of the sexism that pervades my field sort of written in my head, and I should type them out before they get swamped by thoughts about merging databases, revamping applications, and other random crap. Don't hold your breath, but feel free to tell me which of those topics you think I should write about next in the comments.
Posted by Cloud at 10:24 PM