I decided that I needed to write the last post about our not-so-recent-now California car trip soon, before I forget all the details. Last time I wrote, we were in Morro Bay and then driving through Solvang on our way to Santa Barbara. We arrived in Santa Barbara in time to check into our hotel and settle in a bit before heading out for dinner. We walked to The Brewhouse, a brew pub that was near to our hotel. It turned out to be a really lucky find- good food and great beer. My only complaint was that it was a little too loud, which was a bit overwhelming for Petunia. She handled it OK, but her eyes were huge for most of the dinner, as she struggled to take all the hubbub in.

The next morning, we rented a surrey bike and took a ride along the beach path, ending at the Andree Clark bird refuge, where we stopped for a snack. Then we biked back, stopping for awhile at a beachfront playground. The ride was surprisingly fun for all. Pumpkin and Petunia had a little too much fun ringing the bell, though. Helpful hint for the designers of these bikes: put the bell string by the grown ups, not the kids. The people whose apartments and hotel rooms face onto bike paths will thank you. (We did try to keep our kids from ringing the bell willy-nilly all along the way, but our success rate was probably only 75%. So 25% of the people along the path probably hated us.)

After we returned our wheels, we had lunch at the El Torito next to the bike rental shop. For the non-Californians out there, El Torito is a chain. The food is reasonably tasty, but it is far from authentic. There were many restaurants in Santa Barbara that would have had better and more authentic Mexican food. In fact, there is apparently a hole-in-the-wall place that is so wonderful and famous that people drive up from LA just to eat there. But it was sure to have a wait, and Petunia doesn't do waits right now. Petunia likes the rice at El Torito, they are extremely welcoming to children, and it was right there. And the margaritas aren't half bad. So I count this as one of the better lunches on our trip.

After lunch, we did some light sightseeing- we walked out onto the pier and along State Street. Then we went back to the hotel for a rest. Once we were all awake again, we headed out to take a ride on the Lil' Toot water taxi.  We had to wait around by the harbor for a bit, so there was quite a bit of excitement when we saw the taxi headed towards us. 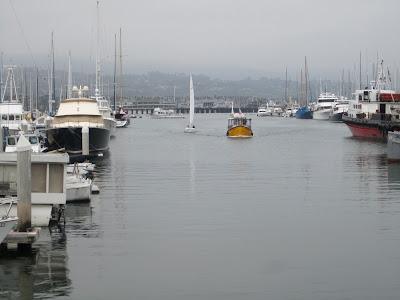 Pumpkin was pretty excited to get on the boat. Petunia didn't really know what was going on, but didn't protest. 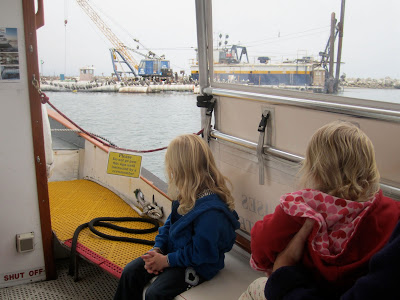 Then we cruised across to the pier, getting a nice close up look at some pelicans on the way. 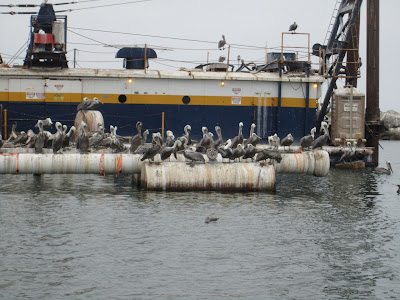 We decided to take the return trip, too, and were rewarded with a chance to try out piloting the ship. 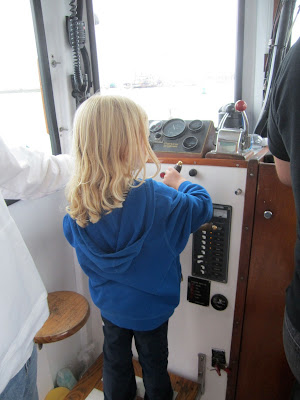 Amazingly, the novice captains didn't run us aground, and we disembarked without incident. We strolled back to the pier for a dinner memorable mainly for the fact that Petunia spent most of it as far away from our table as possible, dancing to the music and charming a couple of older women who were eating at a table near her preferred dance spot. It was definitely a tag team meal for me and Hubby.

The next morning, we packed up the car for the last time and headed home. The drive from Santa Barbara to San Diego is about four and a half hours- and there is the wild card of LA traffic in the middle. I have literally never driven through LA without hitting a traffic jam somewhere, even the time in graduate school when I drove through at two in the morning. Therefore, we decided to split up the day. We got up in the morning and drove to Oxnard, where we visited the small but excellent Gull Wings Children's Museum.  This was a far less flashy museum than the Kidspace museum that started our trip  in Pasadena, but it was just as much fun. Our kids really liked it, and I actually think that kids just a little bit older than ours would have liked it even more. If you are ever near Oxnard, I recommend stopping in.

We played at the museum until lunch, and then drove to a nearby Olive Garden for lunch. Once again, the chain lunch went well- sorry, foodies, but some of our best dining experiences on the trip were at chains. I think they just have the routine for dealing with young kids worked out. They provide a coloring sheet that is busy enough to distract even a two year old for a little while, they fawn over the kids (which also distracts them for awhile), and the food comes out fast. With that said, Pumpkin actually did great at most of the restaurants we visited, so perhaps a wider range of restaurants will work for us soon, once Petunia is past the super short attention span phase.

After lunch, we packed the kids into the car and headed home. The requisite LA traffic jam was very short, and we made excellent time. Still, we didn't make it home before the end of nap time (I just don't drive that fast). We stopped at a park in Carlsbad for one last vacation playground visit and afternoon snack, then drove the remaining 40 minutes home. It was good to be home, but I would have been happy to stay on the road for another few days- so I guess this was a very good vacation, indeed.
Posted by Cloud at 4:12 PM