A Walk on the Beach

I've been feeling a bit out of sorts. I know why: even though the new job only lasted for four days, I had a whole bunch of plans and hopes for what it would mean, both professionally and personally. It is only normal to mourn the loss of those. It is just inconvenient to be doing that right now, in the middle of the holiday season, which is so busy. Also, I am quite fortunate to have a good lead for another job already, but that has also made me busy, so that I haven't really had time to process my feelings about the lay off.

So last Thursday, I decided to take a walk on the beach. I didn't go in thinking I'd pick up shells: I was mourning, not celebrating. But there were so many sand dollars on the beach, I couldn't resist picking some up! 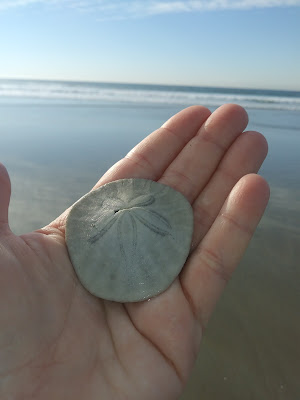 And then I realized, I did have things to celebrate. I'd released Both Sides of My Skin, and I'd gotten Inbox Stories up and running. Just because my plan for keeping my little publishing company running without ruining my family's finances didn't work out, that doesn't mean I shouldn't celebrate the successes of the company! So I picked up shells with abandon. 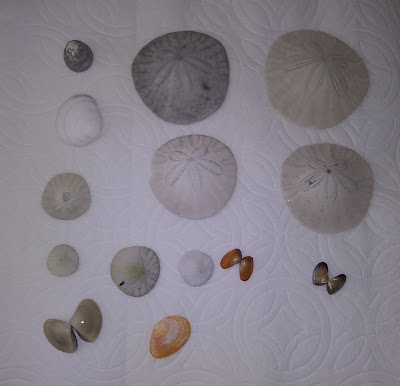 I wish I had more time to sort through my feelings, but right now, I don't. The kids are out of school, and we canceled their registration in the camp we'd planned to have them attend this week. They'll be home with me, except on Tuesday, when I have an interview (!) so Mr. Snarky will work from home to keep an eye on them.

I may not get the time to wallow in feeling sad about the lay off, and maybe that's for the best. Shit just happens sometimes, and there's nothing much to do but try to shrug it off and find a good plan B.

But then again, any excuse for more walks on the beach....
Posted by Cloud at 6:05 PM