Today I took my new rollerblades out for a spin and it was pretty awesome. Here are my new skates: 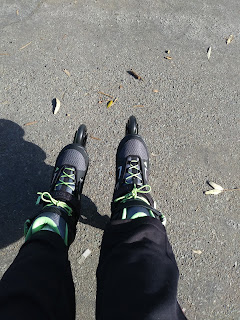 And here's a nice bird I skated past. 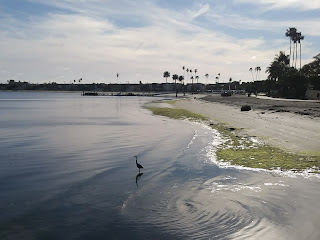 There were a bunch of sanderlings out on one of the beaches, too, but I wasn't close enough to them to get a good picture. All in all, it was a very nice outing, despite the fact that it is colder and windier than I prefer. I had to wear a fleece!

Anyhow, on to the links.

I wrote up most of our NZ vacation over on Adjusted Latitudes. I'll write up the rest of the vacation soon.

Also, it is not too late to get in as an advance reader for The Dodo Knight, Michelle Rene's novella about Alice Liddell, the muse for Alice in Wonderland. I'll be sending out the first batch of advance copies this weekend.

This was an interesting article about what some focus group voters in the Midwest are angry about. (Not the point, but reading this makes me think that the pharma/biotech industry will probably come to regret its current approach to pricing. For an industry that has done so much good - look at the change in survival rates on so many cancers and how much better asthma meds are now, for instance - we sure are hated. We can argue that we aren't the main driver of health care costs all we want... we're the sector that's hated.)

Loop is an interesting idea. I hope it makes it out of the initial test markets into wider release.

This article about Japan's "evaporated people" is fascinating.

In recommended listening: I just finished listening to the third season of More Perfect. It was about the amendments to the Constitution. They made an album of songs about the amendments (including Dolly Parton singing about 19th!) and the podcast plays bits of the songs and also tells stories about each amendment, serving as "audio liner notes." It is really a lot of fun to listen to.

In lieu of a bunny, this week I give you... BUNNYHENGE! I can't believe I haven't visited. I may rectify that soon.
Posted by Cloud at 8:23 PM