As I wrote in my recent post about happiness, we're trying to get out more, to enjoy our city and region. It is, after all, a major tourist destination. I've decided to also try to write posts about at least some of our outings- after all, I write posts about our trips elsewhere. I've started a new San Diego label, and tagged a couple of my older posts that fit the description- a post about our trip to Legoland and a post about an outing to Coronado. I have apparently never written a post about a trip to our "world famous San Diego Zoo"- something I may have to rectify some day.

But today's post is about another famous San Diego destination- Sea World. We live literally 10 minutes from Sea World by car. We drive past Sea World anytime we go to our favorite beach (another thing I should post about for this series, I guess). And yet, we had never taken Pumpkin there. In fact, I hadn't been since before I moved to San Diego the first time- i.e., in graduate school. The last time I was at Sea World, I still lived with my parents! Part of the reason we hadn't gone earlier is the cost. There is no way to stretch the definition of the word "cheap" to include Sea World. We bought our tickets online and got a discount- they were "only" $62 each. Including for Pumpkin. At least Petunia can still get in free (kids get in free until they are three). The other problem is that I remember Sea World how it used to be, when it was more like a zoo and less like an amusement park. I miss the simpler "old" Sea World.

But a lot of Petunia's friends have been, and she knows all about Shamu. She's been asking to go, too, so we promised that we'd make it happen this year. Last weekend, we made good on that promise. In fact, we bought the "two visits for the price of one" tickets (no reason not to- they cost the same as the regular admission tickets)- so we'll probably go back again in a couple of months.

Despite my grumbles about the cost and the proliferation of rides and the fact that we now know in hindsight that Petunia was getting sick, we had a great time.

We arrived before 10 a.m., and took a quick look at the dolphins in their feeding area before heading to grab some seats for the Shamu show.

Petunia didn't appreciate the ~15 minute wait for the show, but Pumpkin was thrilled with our seats at the front of the splash-free section. Pumpkin was suitably impressed by the show, which included the jumps and splashes that you'd expect. 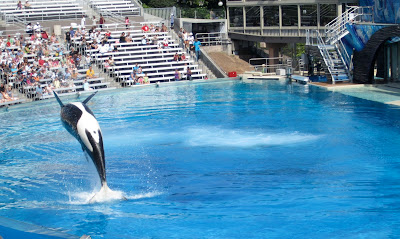 Petunia was less impressed. She fell asleep and slept through the show, which was the start of an extended multi-part nap that covered most of the rest of the visit. She had a fever when we got home, and we wondered if we'd let her get overheated (it was a fairly warm day), but I came down with a fever Wednesday night, so now we know that she was just sick. Hopefully she'll feel better on our next visit- I think there were some things that she would have liked.

She did like the penguins. I'm not sure if that is because they are cool animals (and they are!) or because their building is kept super cool. The dark, cool enclosure also provided an excellent place to let her nurse. 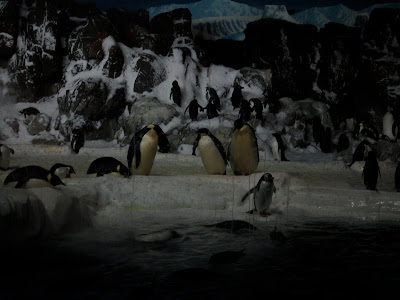 (By the way, if you are visiting San Diego unencumbered, or with older kids, a fun thing to do is rent kayaks and paddle around Mission Bay. You can paddle around the back of Sea World, and see some penguins playing in the water- there is a caged off enclosure there,  which you don't see from Sea World itself. )

After cooling off with the penguins, we had a surprisingly tasty lunch at Pineapple Pete's before heading into the Sesame Street section, called the "Bay of Play". Pumpkin enjoyed the splash area, but Petunia wasn't interested. Again, I suspect she would have had fun if she'd been feeling well- although there were big splashes and big kids, so maybe not.

Petunia was mildly amused by the Elmo show, but to be honest, I think the sight of Elmo and crew dancing and singing "Hot, Hot, Hot" amused the grown ups more. Maybe next time, when she's feeling better, Petunia will be excited to see Elmo. 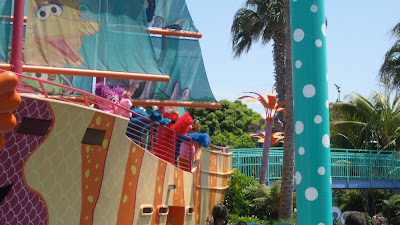 Pumpkin enjoyed a ride on some spinning tea cups in the Sesame Street section, but I don't have any pictures of that since Hubby took the camera on the ride. (Spinny rides are strictly Hubby's responsibility- they make me sick.) She also really enjoyed this boat over by the sharks, which didn't go anywhere: 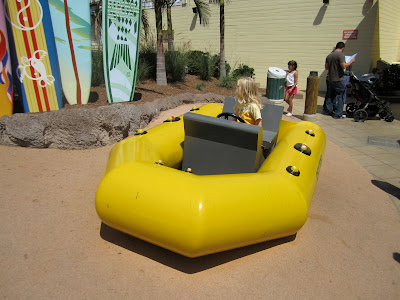 I had to wait outside with Petunia (who was sleeping in her stroller) while the rest of the group went in to see the sharks, so I still don't know if what that exhibit is like. Hubby tells me that the sight of sharks swimming over your head is pretty cool.

After the sharks, we headed to the tide pools that I remember from the "good old days". They are still there, and Pumpkin definitely enjoyed getting a close look at a sea star.  The narration is well done, too.

By this time, everyone was getting pretty tired, so we headed out, stopping by to say goodbye to Shamu before we left: 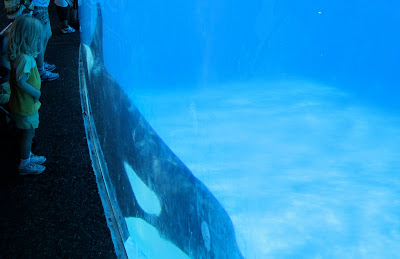 All in all, it was a good trip. Pumpkin certainly enjoyed it, and Petunia did OK, despite the fact that she was coming down with a fever. I think Legoland might be a slightly better destination for kids the ages of our girls (4.5 and almost 2), so we won't buy a year pass yet. For instance, neither of our girls really had the stamina to wait for another show- we'll have to see the dolphin show next time. But if I were visiting and had the time, I wouldn't hesitate to bring kids their age to Sea World. There will be enough to keep them interested, and the adults will probably have a nice time, too.
Posted by Cloud at 2:58 PM