The first real "destination" on our California road trip was Sequoia National Park. I can't really say why I picked this as something we had to see on this trip. I'd never seen it (although I have seen the redwoods). I thought my husband might like it, and hoped that Pumpkin would be impressed by the big trees. I figured Petunia would just be happy for a chance to take a spin in the hiking backpack- she loves that thing.

We stayed for two nights in the area, basing ourselves in Three Rivers. We had wonderful weather for our visit- we were even able to spend some time in the hotel's pool and spa, which delighted the girls.

But the main attraction was the big trees, so we headed to the park entrance fairly early on our first morning in town. The road into the park wound around quite a bit, so it took longer than we expected to get to the visitor's center, and Pumpkin had her first experience of feeling a little car sick. Thankfully, this was the one and only time she felt car sick on our trip- it was brought on, we think, by the fact that she was trying to color while we drove, so when we got to driving the coast road south from Monterey later in the vacation, we just told her not to color, and she didn't have any trouble. I, on the other hand, had to be the driver and drink a fizzy drink and eat pretzels almost continuously. So I guess the propensity towards carsickness is one bad trait of mine she doesn't seem to have inherited!

Anyway, back to the trees. They were tall. 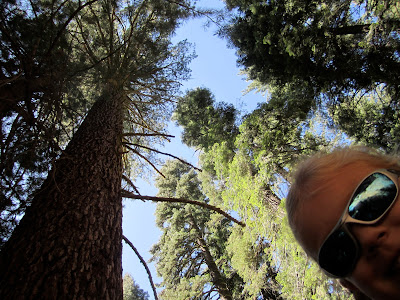 I had picked out the "hike" to see the General Sherman Tree (really a stroll along an easy path) as our morning's activity. As predicted, Petunia liked riding in the hiking backpack. Pumpkin liked the walk down and was moderately impressed by the big trees. 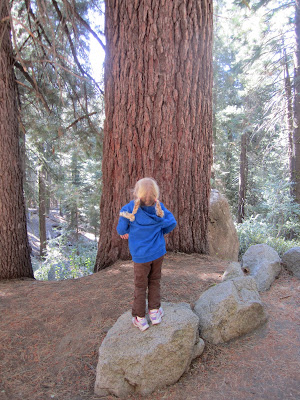 We were all impressed by a sighting of a black bear. 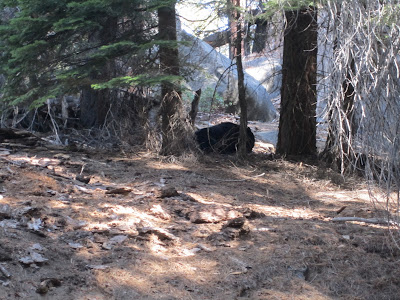 Petunia said "rarrr" at it. Pumpkin was excited by the idea of telling her friends at day care about it. Hubby and I were glad that it was close enough to be impressive (despite the poor quality picture we managed to take) but not so close as to be scary.

The General Sherman tree is impressive more in thinking about how old and big it is than in the seeing of it, but it was still worth the trip. There was also a fallen tree with a tunnel through it nearby, which amused the girls.

The walk back up to our car required some quick parenting thinking- Pumpkin was whining that she was tired, and there was no way I wanted to carry her back up that hill. So I came up with the idea that we should count the stairs, and miraculously, that worked. I now know that there are 80 stairs on the path between the upper parking lot and the General Sherman tree.

We had thought that we might drive over to the other end of the park and have a picnic lunch, then take the scenic drive into King's Canyon for naptime, but given how long the drive into the park had taken, we decided that wasn't a good idea. (One of many examples on this trip where we decided to skip something because we couldn't realistically expect our girls to do well with the activity.)

So we drove down to the Giant Forest Museum and had out picnic lunch there. We walked around the museum a bit, then drove back into town while the girls napped. Our visit to Sequoia National Park had been fun, but woefully incomplete. We've mentally marked it as a place to return to when the girls are a bit older.

After nap, we played in the aforementioned pool, had a low key dinner at the local pizza place, and then went to bed early, happy with our day.

The next day, we drove to a nearby state recreation area, Slick Rock. There is easy access to the Kaweah River from the parking area, so we walked down and had our morning snack by the river. (Or is it already Lake Kaweah here? I can't tell from the maps I have.) 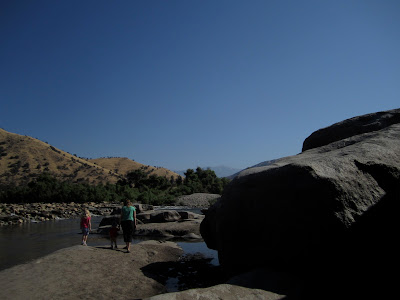 We admired some little frogs in a calm, shallow pool. Then we splashed out feet in the river water, watched the birds fly overhead, and just enjoyed the scenery and the nice day. 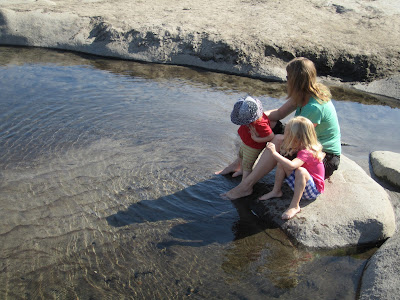 (I swear that Hubby didn't take a picture of the backs of our heads on purpose... but it is sort of convenient that he did, isn't it?)

Eventually, we decided it was time to climb back in the car, and we headed to a nearby town for another picnic lunch. We drove through farmland for awhile before connecting with CA-99 and heading north towards our next stop.