I am determined to finished writing up our summer road trip! In the last installment, we were in Carson City, Nevada. The most direct route to our next stop, Lee Vining, California, would have involved heading south from Carson City, but it seemed ridiculous to be so close to Lake Tahoe and not see it, so we drove west, instead.

Lake Tahoe is as beautiful as I'd heard. I think my biggest mistake of the trip was not putting the kids in their swimsuits that morning and letting them have a swim in the lake. I certainly heard about that bad decision for quite awhile! But even without taking a swim, we enjoyed our visit. We first went a little bit north, and visited Sand Harbor, which is in Nevada.

Here, the water was crystal clear and we really got a sense for why Tahoe is so famous. There is a Shakespeare festival here, and it would be a beautiful venue.

After dipping our toes in the water, whining that we weren't swimming and/or stand up paddleboarding, and walking about a bit to enjoy the view, we drove south to South Lake Tahoe, which is just over the border in California, stopping along the way to take a picture of a classic Lake Tahoe vista: pine trees, blue water, and snow on the mountains. 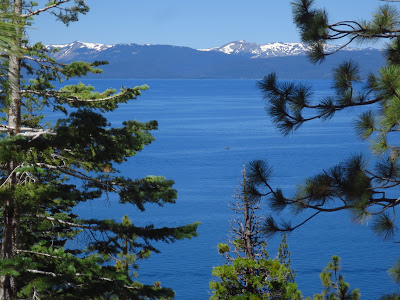 The water was less clear in South Lake Tahoe, and the crowds more obtrusive. We picked up some Subway sandwiches for lunch and ate lunch at a park. There were steps where the kids enjoyed letting the waves come and splash them, and all in all, it was a good stop.

We resolved to come back and see Tahoe properly sometime, and headed south. There was some absolutely beautiful scenery between South Lake Tahoe and Loope, but we failed to capture any of it on the camera. If you ever get the chance to make this drive, though, take it. The mountains are spectacular, and I still think that in retrospect, knowing what I later saw in Yosemite.

As we drove own from Loope, we passed the preparations for the famous Tour of the California Alps, aka the Death Ride. It would be a beautiful ride, but I was tired after driving the road. I can't imagine cycling it!

By the time we got out of the mountains, it was almost time for a snack/rest break. I'd found Walker Burger by searching on Google Maps. The reviews said it was a great roadside stop, so we decided to try it out. It was a wonderful stop. It had a beautiful shady yard and patio, and the same relaxed vibe we later appreciated so much in Lee Vining.


After our rest, we drove on, and began to appreciate why people love the Eastern Sierras so much. It really is beautiful country, with lush green valleys and snowcapped mountains in the distance.

Eventually, Mono Lake came into view. Mono Lake is an alkaline lake, famous for its tufas, which are limestone protrusions. Sunset is late in early July, so we managed to go see some tufas, made even more spectacular by the late afternoon sun. 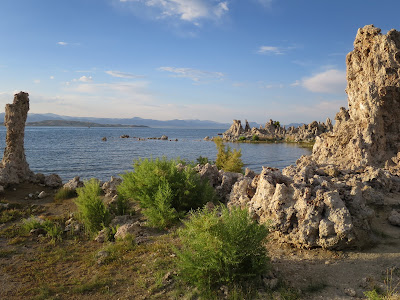 After our visit to the tufas, we returned to our hotel and had dinner at the onsite restaurant, the Epic Cafe. It really was epic... we all loved our food, and we ate on a grassy lawn, and the grown ups got to linger over our drinks while the kids did cartwheels in the distance.

We turned in early, hoping to get an early start for the next day, which was to take us to Yosemite Valley. I'll pick up the story there next time.
Posted by Cloud at 10:12 PM