I am determined to finish writing up our summer road trip before Halloween... and Halloween is right around the corner. So, tonight I have managed to finish the most pressing items on my to do list and will finish off the story.

At the end of my last installment, we were enjoying a final relaxing dinner on the lawn at the Epic Cafe in Lee Vining, having enjoyed Yosemite. We got up the next morning with plans to visit the Devil's Postpile National Monument (another Junior Ranger badge was in the offing!) but we were thwarted by the unusually heavy snowfall of the prior winter. The road to the National Monument was still impassable for the bus that usually takes visitors to there, and the only other way to reach it would be a hike that sound far too long and too strenuous for us.

We were in Mammoth, because that was where the bus would have picked us up. So we decided to go on up the mountain. The remarkable thing about this was the fact that people were skiing and snowboarding in bikinis and board shorts. It was a beautiful, warm day... but the snow was still on the mountain, so people were still skiing and boarding down it. 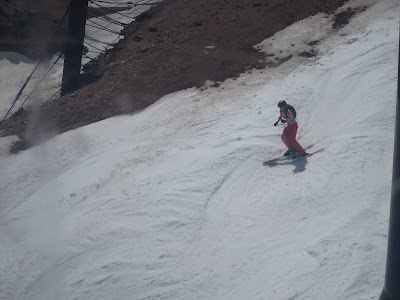 The view from the top was pretty, but it was really windy, so we didn't linger long. 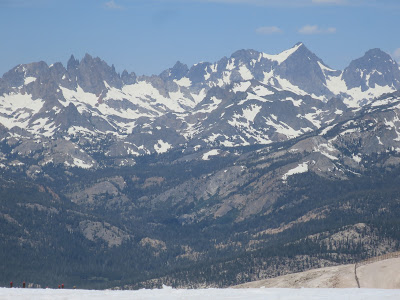 After coming down, we gave in to the pleas of our children and let them go on the bungee trampoline thing. Then we had lunch, and headed south.

Our next stop was Manzanar National Historic Site. This was one of the internment centers set up by the US government for Japanese-Americans during World War II. It is not a proud moment in our history, and it felt even more disturbing to be visiting it at a time when some foolish people were referencing that time as a justification for banning Muslim immigrants. However, the site itself is very well done. There is a museum in the visitor's center that does an excellent job explaining what happened (but not justifying it) for both adults and children. They have activities aimed at children Petunia's age, such as asking them to think about what they would pack if they could only bring 10 things with them. However, I don't think the meaning of the site really sunk in for Petunia. Pumpkin, though, read and understood a lot. I think the visit made a strong impression on her.

As for me, I cried during the film and I cried looking at this wall:


I cried reading a lot of the exhibits, actually. It was a horrible thing we did, and the exhibits show that and the effect of it on people's lives starkly.

We were visiting at the end of their day, so we didn't get to spend much time in the barracks that are still standing. However, we did drive the perimeter, stopping to see the remains of the Japanese garden the camp residents had created.


And to see the cemetery and memorial. 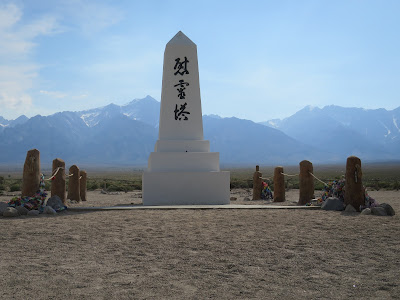 Most families chose to move the people who were buried here once the war was over, but there are still a few graves.

After leaving Manzanar, we drove on to Ridgecrest, where we spent the night. Ridgecrest is not really a tourist destination, but it was a convenient stopping point. And we saw a gorgeous sunset.


The next day, we drove home. We stopped for lunch in Riverside. First we walked around downtown a bit (and admired the famous Mission Inn), and then we drove to a brewpub called Wick's for lunch. Lunch was very good... which was a good way to end the trip.

As always after a vacation, we were glad to be back in our own beds (particularly since the beds in our last motel were pretty uncomfortable), but a little sad to have our adventures over. But we're already talking about future explorations!
Posted by Cloud at 10:36 PM