Most people visit Yosemite from the West, but on our summer road trip this year, we decided to come in from the East.

The advantage of this is that you get to stay in the utterly chilled out little town of Lee Vining, and see Mono Lake and its tufas as well as Yosemite. The disadvantage is that it takes a couple of hours to drive to Yosemite Valley from Lee Vining. The drive is gorgeous, through Tuolomne Meadows and past many lakes, waterfalls, and viewpoints.

When we visited, in early July, there was also an extra bonus: snow! The kids had a blast playing in the snow.

However, that two hour drive to the valley meant that we arrived with the crowd instead of ahead of it. And OMG, the valley was crowded. Unlike at the Grand Canyon, which has managed to ban cars from the most popular part of the park during peak season, cars are allowed in at Yosemite. We parked our car and planned to take the bus around to see the sites, just as we had at the Grand Canyon. However, as we learned after lunch, if there is a traffic jam of cars, the bus isn't going any faster. (There was some road construction that closed the bus only lane: perhaps if that had been open, we would have had a better experience.)

But at the start of the day, we didn't know about the traffic jam that would mar our afternoon. We walked along a meadow to get to the visitor's center and get our Jr. Ranger books. It was a nice walk.

After collecting our Jr. Ranger books, we decided to head back to see the Yosemite Falls. We took the bus back to the trailhead for the Lower Yosemite Falls and walked up to see them, along with a bunch of other folks.

By the time we got back down from the falls viewpoint, it was basically lunch time, so we headed back to the dining options near the visitor's center and had lunch.  On our way, we saw a deer. 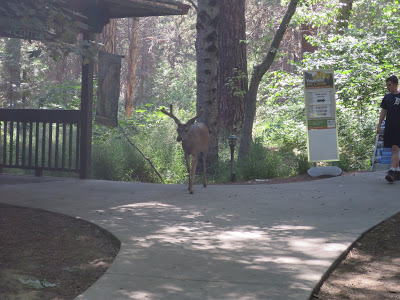 We had seen a couple of deer earlier, in more natural settings, too, and we'd see even more the next day. But still, this was quite a sight.

After lunch, things started going poorly. We tried to take the bus over to the trailhead for Mirror Lake, but traffic wasn't moving, and in the end, we had a walk (with none-too-happy children) over to Half Dome Village, where we ate dinner. After dinner, the traffic had cleared, and we were able to catch a bus back to our car and then drive out of the valley.

We got back to our cabin late, a little disappointed with how the day had gone.

The next morning, we headed out to Bodie State Park. Bodie is a genuine ghost town. I think Mr. Snarky was the most impressed with this stop, but we all enjoyed it. The buildings are in a state of "arrested decay." 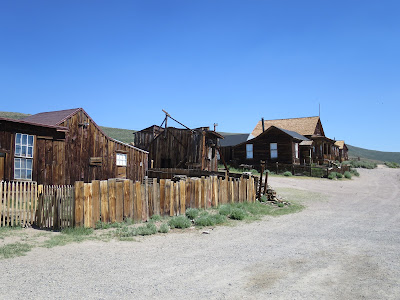 You can only go inside a few, but you can peer into the windows of most.

We were very glad we'd gone to Bodie in the morning, because by the time we left, it was quite hot. We finished up before lunch, and headed back to Lee Vining.

After lunch, we changed the kids into slightly warmer clothes, and headed back to Yosemite, planning to explore Tuolumne Meadows. I am so glad we did, because this second visit to the park rescued my opinion of the visit. The meadows were far, far less crowded than the valley had been. With the help of a ranger, we chose the Soda Springs hike as out best option. It was a beautiful hike. 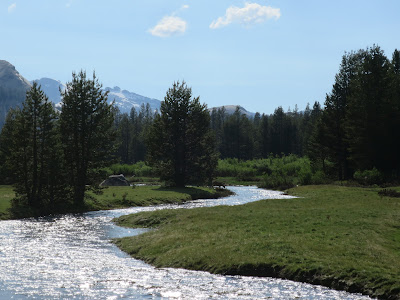 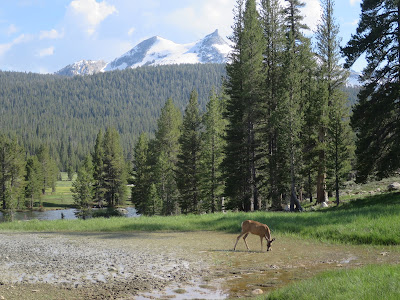 And saw the soda springs. (That's carbonated water bubbling out of the ground!) 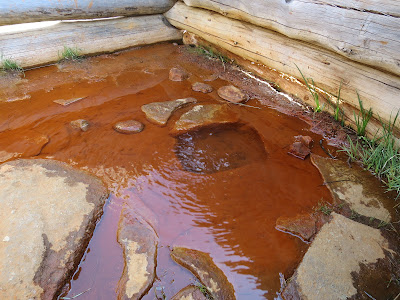 And then we headed back to the car.

Pumpkin and Mr. Snarky got ahead of Petunia and me, and missed out on one of the great treats of the trip: a group of 5 bucks running past us, so close that I was actually a little concerned for our safety. They were big animals! Of course, Mr. Snarky had the camera, so I couldn't document the moment.

On our way out of the park, we stopped to play in the snow, of course. 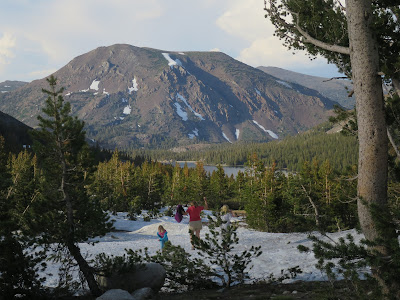 We had to drag the kids away.

As we left Yosemite, I wished we could have seen the "big" sites in the valley at a less crowded time. Perhaps we'll come back in spring or fall some year. But I was glad to have gotten to visit Tuolumne Meadows, and that is not as accessible in the shoulder seasons, when there is more snow on the ground and the temperatures are lower. So I scored it a good stop.

We returned to the Epic Cafe for dinner. Mr. Snarky and I split a bottle of wine, and the kids did cartwheels once the crowd cleared out.

We went to bed quite happy with our stay in Lee Vining. We'd leave the next day, heading home. We had a couple more interesting stops (such as Manzanar)... but I'll pick up that story next time.
Posted by Cloud at 10:27 PM