And Now We Are Four

So, now Pumpkin is 4. On her actual birthday, we had a fairly low key "family" party, but yesterday we had the big "day care"party. There are two other kids in her day care class with birthdays very close to hers, so this year, the three families got together and planned a joint party. We held it at KidVentures, a local indoor play place, and all the kids had a blast.

Last year, I made Pumpkin's birthday cake. But this year, we had more people at the party and two other families to help split the costs, so we splashed out and bought cupcakes. My friend Jenny has decided to start up a baked goods catering service, and we decided to get her to make our cupcakes. She had to be out of town this weekend, so she delivered the cupcakes a couple of days early and I put the fondant toppers on myself. Even with the decidedly inexpert finishing touches, the cupcakes turned out very cute: 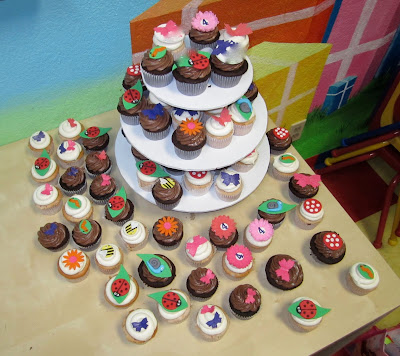 They were a huge hit at the party. The adults all raved about them, and even Pumpkin, who usually only eats the frosting, ate the entire cupcake. And wanted more. We let her have another half cupcake as dessert after dinner last night. I'd show a picture of her happy, chocolate smeared face, but that would violate my "no faces" policy, so you'll just have to take my word for it. She liked the cupcakes! So- San Diego folks, if you're looking for a yummy cake or cupcakes for a special occasion, check Jennywennycakes out. You won't be disappointed! (She has a Flickr page with more pictures of her awesome cakes if you want to see them.)

In addition to cupcakes, Pumpkin got heaps of presents. She is over the moon happy with all of her new toys. I am surveying the disaster that is our living room and thinking that it is time to clear out some old toys and donate them to my favorite local children's charity. Since it has become known that we have given in and accepted the Princesses into our house, Pumpkin got quite a few princess things. Say what you will about Disney, but you can't accuse them of missing any marketing opportunities. Here she is with her new Snow White's kitchen play set, wearing one of the new dresses she got for her birthday, pronounced to be a special occasional dress, and insisted she should wear to her party: 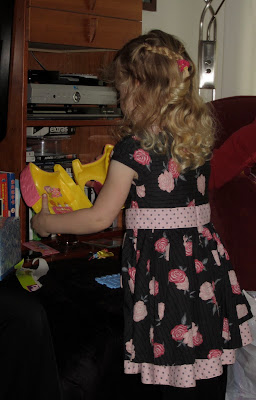 And because Petunia was a real trooper through all of the partying and gift opening (she was annoyed when she couldn't claim Pumpkin's new toys as her own right away, but handled it all fairly well), here's a picture of her from the trip to the Carlsbad flower fields that Hubby took with her and his parents, who are in town from New Zealand right now. 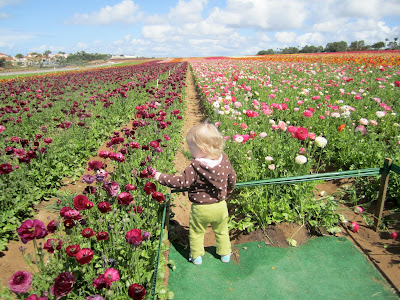 I am hiding out blogging instead of playing with my kids because Petunia will only play with other people when I'm not around, and I want to give Hubby's parents a shot at some good play time today, since they leave tomorrow. But I think it is time to go out and join the fun! I hear the sounds of bubble chasing coming from the backyard....
Posted by Cloud at 5:04 PM