Newbie in the Garden

One of the things I've done with some of the time I've bought is start a small vegetable and herb garden. I have never thought of myself as a particularly capable gardener. My herbs usually die. And the spot we have available right now for a vegetable garden is not optimal- it is on our south fence, and doesn't get much sun.

Between my conviction of my own gardening ineptitude and the overly shady plot available, I've always been able to talk myself out of starting a garden. But for some reason, a couple of months ago I just decided to plant some things. So I bought some herbs and some vegetable seeds. I always try to grow cilantro and basil, because those are the two herbs I'm always buying at the store, using a small portion of, and then letting go slimy in my fridge. I added some parsley and chives. For vegetables, I selected green onions (because the ones I buy at the store suffer the same fate as my cilantro), arugula (because I actually like it and it is stupidly expensive), and carrots (because... I don't know why. Probably because I saw some multi-colored carrot seeds and thought they looked fun).

Pumpkin and I planted everything one afternoon, and then we watered and weeded (OK, I weeded while the kids played in the backyard) and waited. An lo and behold, things grew. And grew. And grew.

We had a lot of rain this spring, interspersed with a lot of sun. My theory is that, combined with the fact that the dirt I planted in was heavily enriched from our compost pile, led to my unexpected success as a gardener. Suddenly, I had more arugula than I knew what to do with- because I am a complete newbie, and I made the classic newbie mistake of planting all at once, instead of staggering. 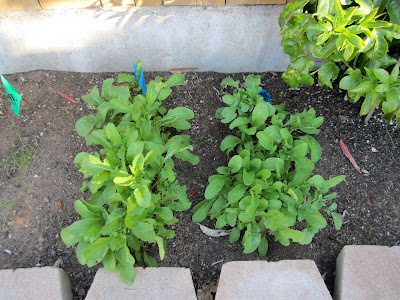 My cilantro grew to be a huge bush, and then did what my cilantro always does: it bolted. 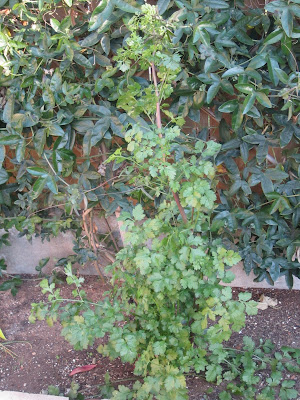 Meanwhile, the arugula is getting too old and bitter to be eaten in a salad, so I harvested a bunch and made pesto. I used an internet recipe as a starting point (yet another example of how my life is easier thanks to internet searching), but changed the proportions as follows: 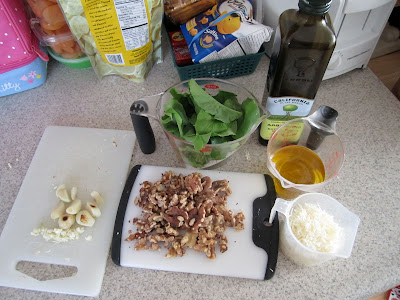 I browned the 6 unpeeled garlic cloves as instructed (i.e., for about ten minutes in a skillet over medium high heat), and then removed the skins. I toasted the walnuts and grated the cheese, then I blended everything up in the food processor. 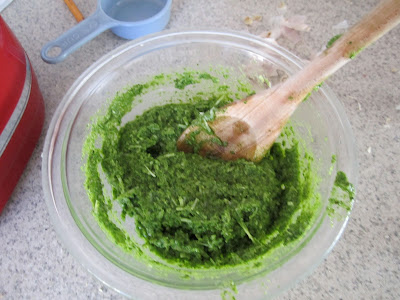 We ate about three tablespoons mixed with ~1/4 cup of pasta water over ~8 oz of pasta that night, and then I partitioned the remainder into an ice cube tray and froze it. I'll defrost a cube or two at a time to server over pasta or gnocchi for a quick weeknight meal- so I'm tagging this post with my "Dinner during Dora" tag, even though the initial pesto prep might take more than 20 minutes (but it might not, if you're speedy).

And then something really funny happened. I suddenly understood that Barbara Kingsolver book on food that I read when I was pregnant with Petunia. I still don't agree with everything in it, but I finally understand it. Back then, it annoyed me because it seemed that unreasonable to think that a busy, two career family like ours could find the time to grow any of our own food. But it isn't really- if you are lucky enough to live in a climate like San Diego's, it is actually pretty easy. Even a newbie can do it. And end up with a freezer full of arugula pesto.
Posted by Cloud at 10:45 PM