In Which the Gods of Family Outings Smile Upon Us

It has pretty hectic here lately. Petunia's still pretty congested, possibly due to the last cold she had, and her sleep is therefore all screwed up. Hubby and I both have deadlines coming up soon at work, so we're both a little stressed and a lot busy, and needing to log in at night and do some work. My usual 40-45 hour work week is creeping up towards 50 hours, and I'm still feeling behind... blah, blah, blah.

I don't want to write about that. I want to write about our fun outing on Sunday- we went to Legoland! Legoland is in Carlsbad, which is about 40 minutes north of where I live. We went once before, when Pumpkin was about 2.5 years old. It was fun, but nowhere near as much fun as this visit was. I think Pumpkin is at the age when Legoland really starts to be fun, and Petunia had fun playing in "Duplotown", which is a playground with several different play houses. She seemed to like the jail best. I wonder if that should tell us something? 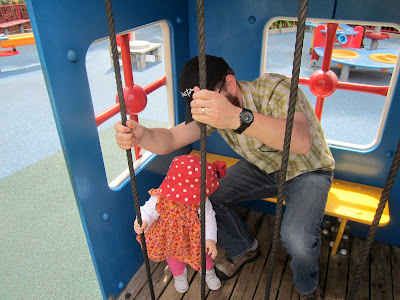 She was pretty fascinated by the toenails on this Lego dude, too. 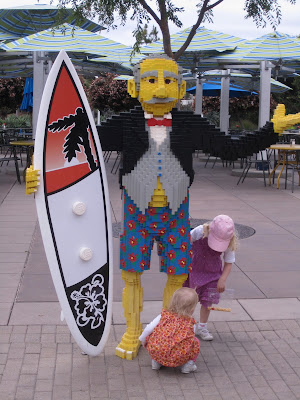 However, Petunia's real favorite thing at Legoland was the bag her lunch came in. It provided an excellent prop for a game of peek-a-boo. 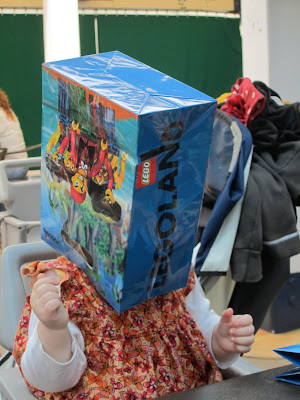 Pumpkin's favorite thing was the horse ride. It is very tame, but it involved being out of sight from us for a while, which, to our great relief, did not involve any tears. In fact, she had a huge smile on her face anytime we saw her. Really. She just turned her head right before Hubby took the picture. (Isn't it great that this blog provides us a use for our failed pictures?) 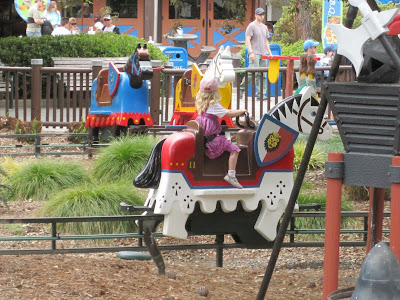 Pumpkin liked steering the toy boats... but again, not quite as much as Daddy did. 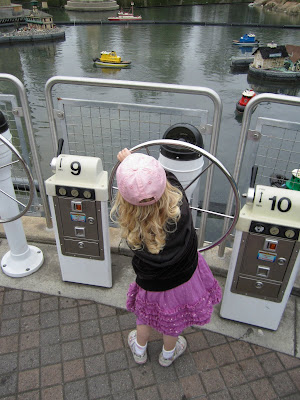 The highlight of miniland for her, though, was catching sight of the castle she stayed in when we went to Las Vegas. 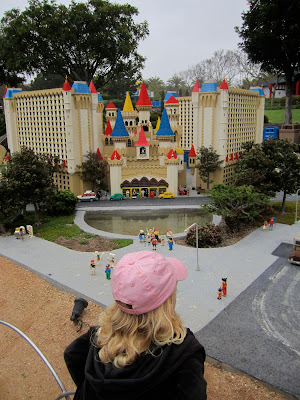 By this point, Petunia was napping. She followed our plan exactly, and fell asleep in her stroller after lunch. Amazing.

All in all, it was a really good outing. I had to write it up so that I can come back and read about it the next time one of our family outings goes all pear-shaped and ends with tears and tantrums!
Posted by Cloud at 10:12 PM