Remembrances and tributes for the tenth anniversary of the Sept. 11 attacks have been all over the place lately. I've read some, but I haven't really felt like writing my own remembrance of that time. Maybe in another ten years.

But I will say this: I think that the level of emergency preparedness in our country is probably a lot better now than it was on Sept. 10, 2001- and I think that is a good thing, not so much because of the risk of another terrorist attack, but because there are so many other scenarios when a little preparedness is very helpful.

For instance, I worked as a contractor for several years, working on both government and commercial projects. One of my government projects was a biodefense project, and I remember being reassured at the time to realize that the system was being explicitly designed to detect natural disease outbreaks as well as a terrorist attack. (Incidentally, I was also reassured by the obvious intelligence and competence of many of the government employees working on biodefense at the time- there were a few people running around who clearly had no clue about diseases and how they spread, and sadly, some of them were in positions of power. But there were enough other people who so clearly and completely got it that I ended up encouraged by what I had seen.)

And in fact, I believe that at least one of the systems that provided early indications of the arrival in the US of what would become the H1N1 pandemic of 2009 was built with biodefense money. But I can't find any documentation on that, so I could be wrong. (My information comes from one of the people who built the system, but it was just a remark made in passing.)

I suspect that individual households are also better prepared now than they were ten years ago. I know ours is. However, I live in an area prone to earthquakes and wildfires, and have seen two massive firestorms in the intervening years, so it is hard to say how much of our preparedness is due to the advice we heard after the Sept. 11 attacks, and how much is due to the general advice we hear about preparing for an earthquake or firestorm.  And I have to be honest- we got a lot more organized and prepared after Pumpkin was born. I thought about not having a clean diaper to change Pumpkin into, or not having food or drinks for her when we needed them, and that galvanized me. We have small emergency kits in both cars now, and a "go bag" ready to grab if we ever need to evacuate our house in a hurry. We've never used the go bag, but have broken into those car kits for everyday emergencies, like forgotten diaper bags and temper tantrums brought on by parental refusal to buy overpriced water bottles.

We also have the more mundane preparedness items: flashlights (with batteries), candles (with matches), a couple of gallons of water in the garage, canned food in the cupboard (rotated at least once a year when I give the old cans to our neighborhood's holiday food drive).

And last Thursday, we got a chance to test our preparations in a real situation that thankfully did not pose any actual threat to our safety- the big power outage. Thinking back on how things went, I give us a solid B+ for preparedness. We have some things to improve, but mostly things went really smoothly.

The power went out at about 3:40 p.m. It was sudden and complete, but of course, we didn't immediately know the extent. I called my husband, who works on the same street I do- but at the top of the hill, while I am at the bottom. He said his power was out, too, but he was still thinking he'd be able to take Pumpkin to swim lessons that night. Then my coworkers started reporting that spouses and friends in other parts of the county had no power, either, and I started to wonder. We still had network, thanks to our backup power supplies, but couldn't get the SDG&E outage map to load, and I began to suspect a massive outage- I figured their servers were overloaded. None of the news sites had any useful information, so I turned to Twitter, and quickly found out that the lights were out as far away as Yuma. At that point, I knew there would be no swim lessons. I called my husband and said I was leaving to go to day care, and we argued briefly about whether I should pick both kids up. He was still convinced that the lights would come back on in time for swim lessons. I disagreed, but dropped it. I went off to check that I could approve the shutdown of all the IT systems I manage. I could (everything that relied on them was down), so I told my boss I was leaving, swung by the IT room and told them that they could shut down my servers if the needed to, and then left. For those not in IT- the loss of power means the loss of cooling in the server room, which risks overheating the computers. So in any significant outage, the IT folk will start shutting machines down, to try to decrease the heat output in the room, and to protect them from overheating.

In the car, I tuned to an AM station on the radio (the FM stations were all offline), and soon realized that there was no way that power would come back on anytime soon. SDG&E had only issued a statement saying "we're investigating". If they didn't know what was wrong, they couldn't fix it. So I called my husband again, to tell him that I was going to pick up both kids and to try to get him to leave, too. It took three or four times to get through, so I told him I wouldn't be calling again. He was non-committal about leaving, since he could see the traffic down the hill we both work on, and he figured it would take him more than 30 minutes to get down to where I had started my drive. In the end, he didn't come home until almost 8 p.m. That is one of the areas in which I give us poor marks- in a "real" emergency, he needs to get up and leave as soon as possible, or risk being trapped at work. It took me 30 minutes to make the usually five minute drive to day care, leaving less than 20 minutes after the power was out, and I had to park the car and walk the last couple of blocks, because traffic was so bad. If he'd left at that time, it would have taken him close to an hour to get to day care. If he'd tried to leave any later, he may not have made it to day care before they close. They would stay open until someone made it to them. But there is no reason to make them do that, and in some cases, it might be safer to get there sooner.

The drive home was a little harder than usual, but not terrible- the loss of the metering on the on ramps made traffic heavier than usual on the freeway, but it was moving. I got home at about 5:40, and started implementing our emergency plan. I filled several jugs with water, a precaution that turned out to be unnecessary for us, but would have been useful in some nearby parts of town, in which water treatment substations had failures after several hours without power. Those neighborhoods were under a boil water order for a day or two. I got the cooler we usually take to the beach, took a few minutes to think about what I needed to pull out of the fridge and freezer for our use that night, and then filled it. This meant that we only opened our fridge a few times, and our freezer twice (once to fill the cooler, and once to get the ice cream out to eat), which decreased the amount of food we had to throw away- and in a real emergency would have increased the amount of food we had available to eat the next day. I got the kids started eating dinner outside, and then I gathered up some candles and a flashlight. I got the matches out, and replaced the batteries in the flashlight. This is another area in which I think we could improve- I have lots of good candles, but most of them don't fit in the candle sticks I have. And I had to pull out some plates to use to hold the votive candles I found- I couldn't find any candle holders for those. I think they were packed away as too breakable/not practical with little kids in the house.

I also found a battery-operated radio. I couldn't find the awesome radio we took on our big trip, so I was reduced to getting my news from a pink rabbit, but it worked. And I had batteries for it, too. 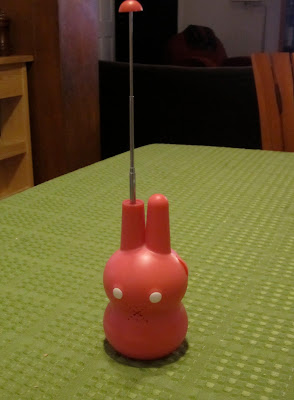 I took the kids for a walk after dinner, and enjoyed the camaraderie on display in the neighborhood. I talked to neighbors I've never even seen before. It was getting dark when we got back, so I lit the candles, and gave the kids a bath by candlelight- complete with bubbles, per Petunia's request. Pumpkin is still talking about that bath!

My husband got home in time to help with the bedtime routines. Pumpkin accepted a slight change, listening to some different songs on my computer rather than her usual CD- but since my computer would have played her CD if she'd insisted, that change was due primarily to my laziness. I stayed with Pumpkin until she fell asleep, and then Hubby and I cracked open the beers I'd put in our cooler, and sat outside and enjoyed the chance to actually see some stars from our backyard. We went to bed unsure of whether we'd be going to work the next day (day care wouldn't open if the lights were still out), but our power came back on at about 3 a.m., and by the morning, everything was back to normal. Except that we had to mix up some powdered milk for Pumpkin's cereal. I was glad I had that on hand- but that was because I'd needed it for a bread recipe at one point, not for any preparedness reasons. I guess I'll be sure to keep that stocked now, at least until we start using those shelf-stable milk boxes they sell now. And I was really glad that the power had come back on, because Petunia likes oatmeal for breakfast, and that would have been hard to make without power. I've now bought some instant oatmeal to keep on hand- boiling water without power is easier than trying to cook old-fashioned oatmeal.

So we'll tweak or plan and be a bit more prepared for the next event- because as I've learned many times since becoming a parent, emergency preparedness isn't just for emergencies.
Posted by Cloud at 9:40 PM